The organizers of the Viet Nam Talent Award 2017 on Tuesday officially announced the list of 17 products reaching the final round of the information technology field. 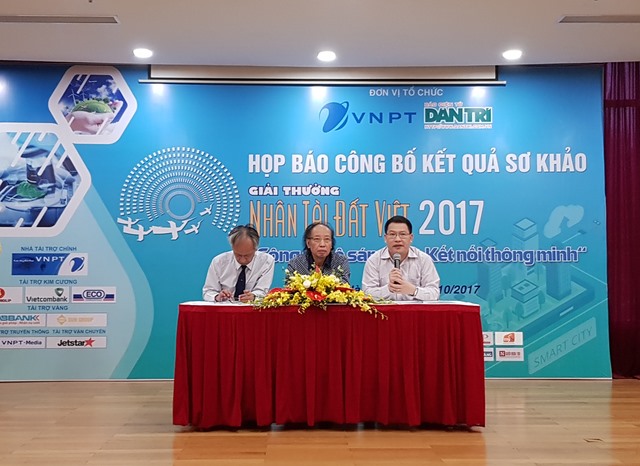 The organisers of Viet Nam Talent Award 2017 announce the list of the 17 IT products in the final round in Hanoi.—Photo danviet.vn

The Viet Nam Talent Award 2017 in the field of information technology carries the theme of “Creative Technology, Smart Connect”. It aims to revolutionize high-technology economic activities in Việt Nam and bolster the creative industry. The 17 finalists beat out 289 nominated products to enter the final round, the organizer said.

The selection round, with the participation of leading experts led by Nguyễn Long, General Secretary of Viet Nam Association for Information Processing, chose 66 qualified products. On October 29, a selection committee chose the 17 best for the final round.

Huỳnh Quang Liêm, deputy general director of Việt Nam Posts and Telecommunications group (VNPT), said the Award entered its 13th year with the participation of many contestants in the fields of innovative technology and smart connectivity. The purpose was to connect talented people and start-up businesses in the country.

He affirmed that, in recent years, the Việt Nam Talent Award has become a kind of playground and a successful launching platform for talented people.  VNPT also emphasized that the awards align with the Government’s many support activities for young startups implemented in the past year.

The “Opportunities for startup Việt Nam” programme in three major cities enables participants to share the secrets of successful starts-up and learn how to turn ideas into reality.

With the first startup award, Mr. Nguyễn Long evaluated many start-up products and found that the companies often struggled to attract capital from investors. While ideas were often strong, he said, implementation was less so.

” Having ideas without looking at the technology and resources to turn those ideas into competitive products will not create success,” Long said.

After announcing the 17 top products, the final examination council will conduct a survey on the quality and practical implementation of the products.

On November 14, contestants will present their products directly to the council of examiners.

Launched by the Việt Nam Study Promotion Association in 2005 and jointly organized by Dân Trí newspaper and VNPT, the Award has become nationally recognised.—VNS