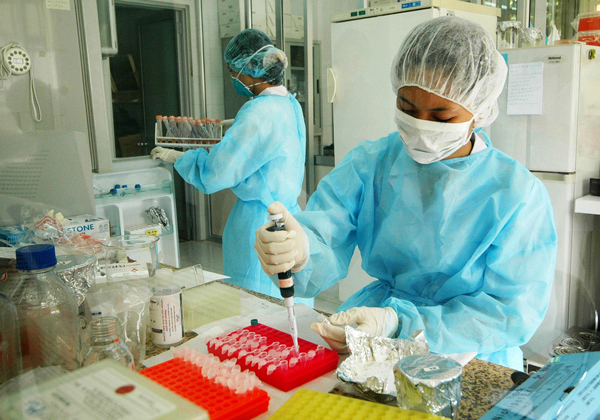 The two kinds of vaccines, used for both adults and children, are called IVACFLU-S (preventing frH1N1, H3N2 and B viruses), and IVACFLU (preventing A/H5N1 virus).

IVACFLU-S is prepared in an injectable solution, and is colorless or translucent white.

It is expected that the two vaccines will receive s license to hit the market with the average price of VND80,000-100,000 per dose. With the price, the vaccine made in Vietnam is two-thirds cheaper than the vaccines available around the world.

The owner of the two vaccines is the Institute of Vaccines and Medical Biologicals (IVAC) in Nha Trang City in Khanh Hoa province.

According to IVAC’s director Duong Huu Thai, the institute began working on the two vaccines in 2005 when the A/H5N1 influenza epidemic broke out.

After successfully preparing a vaccine against H5N1, the institute set to work on a seasonal flu vaccine.

Both the vaccines have undergone clinical tests on 2,000 individuals aged 18-60.

Nguyen Tuyet Nga from the Program for Appropriate Technology in Health (PATH) said the two vaccines successfully prepared in Vietnam will help minimize the risks of influenza outbreaks in the future. From now on, Vietnam can be self-sufficient in vaccine supply when epidemics occur and can support other countries when necessary.

Both vaccines are made from embryonic chicken egg production technology. Therefore, Vietnam needs to have stable supply of standard chicken eggs.

After much research, scientists discovered a French chicken species which can provide suitable eggs. The Ministry of Agriculture & Rural Development (MARD) allowed them to breed and trade the chicken in Vietnam.

IVAC bought one-day-old chicken from France and bred them in Vietnam under a process initiated by the institute. After five months, the chickens started laying eggs. Embryonic eggs were put into incubators for 11 days.

Later, the researchers injected seasonal flu and H5N1 viruses into the embryo. After three days, when viruses had developed inside, they sucked out the virus-containing fluid and began refining and filtering with chemicals to kill the viruses.

According to Tran Van Hieu from the HCMC University of Natural Sciences, 10 out of 12 types of vaccines against infectious diseases can be produced in Vietnam.

Currently, only 45 countries in the world have a vaccine industry and 37 countries meet standards recognized by WHO, which means that vaccines made in Vietnam can be sold in the world market.

The production of influenza vaccines depend on the supply and quality of eggs. Therefore, the national vaccine program is moving ahead with the production of next-generation vaccines to be made from animal cells.

New vaccine to be rolled out soon

Viettel plans to hire 500 IT engineers a year