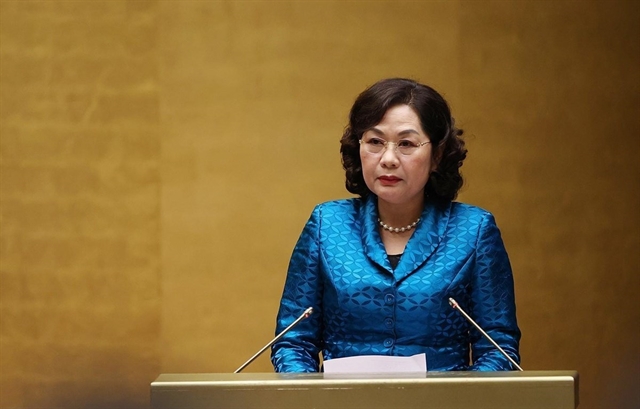 Nguyễn Thị Hồng, Governor of the State Bank of Vietnam, gives a report to the National Assembly during a meeting in Hà Nội on May 24. VNA/VNS Photo

HÀ NỘI — The Government has asked for an extension to a pilot programme designed to handle bad debt from domestic financial institutions during a meeting with the National Assembly on Tuesday in Hà Nội.

The programme, since its implementation five years ago, has contributed to the restructuring of numerous financial institutions and the collection of bad debt during the 2016-20 period, according to Nguyễn Thị Hồng, Governor of the State Bank of Vietnam (SBV).

The programme had helped recover VNĐ148 trillion or 38.94 per cent of all bad debt among financial institutions, a marked improvement over the yearly average of 22.8 per cent during the 2012-17 period.

A recent SBV report said the bad debt ratio among financial institutions was maintained at under 2 per cent, below the 3 per cent target of Decree 42, which has produced positive impacts on the country’s financial sector in terms of management capacity and quality of services.

According to the SBV, the global economy is to remain turbulent due to high inflation, the COVID-19 pandemic and geopolitical conflicts in the 2021-25 period, which will likely result in rising bad debt among Vietnamese businesses.

A conservative estimate by SBV showed the country’s potential bad debt ratio at 6.31 per cent. Unresolved bad debt by the end of last year stayed at VNĐ412.7 trillion, a problem made worse by the pandemic.

In light of recent events, Hồng has asked the National Assembly for an extension to Decree 42 to avoid a policy shortfall that hinders SBV and VAMC to process and resolve bad debt and potentially creates numerous legal complications for financial institutions and customers.

“The government highly recommends policymakers to conduct further studies and reviews to turn Decree 42 into permanent laws, to be presented to the National Assembly no later than 2023,” said the Governor.

She said the central bank’s top priority in the near future is to further improve the financial sector’s resilience and security, especially in support of large infrastructure and transportation projects. VNS