Posted by: vivian on September 3, 2018 in World Comments Off on Vietnamese, Cambodian universities cooperate in training, research

The Kien Giang University signed a cooperation pact, on Phu Quoc island on August 31, regarding training and scientific research with two Cambodian universities. 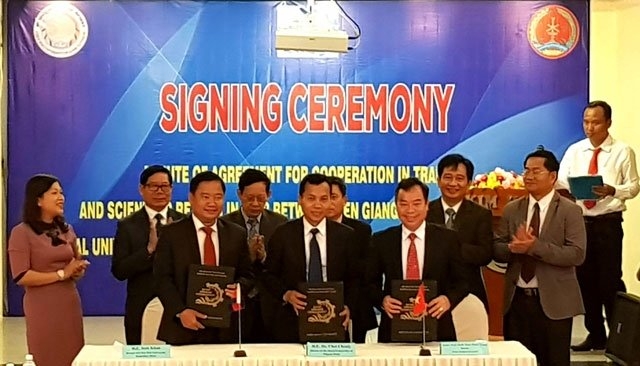 The scholarships will prioritise students residing across the four Cambodian border provinces of Sihanoukville, Kep, Kampot, and Ta Keo – all of which are partner localities to the Mekong Delta province of Kien Giang. Scholarship holders will be sponsored throughout their study in Kien Giang.

Regarding cooperation in scientific research, the Kien Giang University will send experts to the two Cambodian universities to jointly carry out clean farming models, build high-tech models for the production of short-term plants, and to run studies on industrial trees.

He also highlighted their joint research in rice production and organic agriculture.

According to political counsellor Le Thanh Tac at the Vietnam Embassy in Cambodia, who attended the signing ceremony, the Vietnamese Government grants more than 1,000 short- and long-term scholarships to Cambodia per year, while Cambodia helps Vietnam train students following requests from Vietnamese public agencies and sectors.