Posted by: vivian on August 22, 2018 in World Comments Off on Automatic garbage collecting machine invented by fifth grader 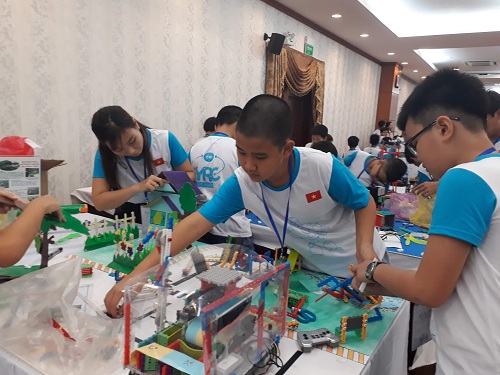 The student from Ba Ria – Vung Tau province began ‘playing’ with machines when he was two years old. At that time, the English learning machine the mother bought was a wonderful world for him. He insisted on using the machine daily.

Some years later, the parents bought him a Lego set of interlocking toy bricks, with which Dieu could create many construction works. He searched information on internet about how to assemble robots and created many toys.

“On the way to school, I can see how hard sanitary workers work. They also face health and other problems as they have to contact waste. I wish I could create a product that helps ease their workload,” Dieu said.

Dieu’s automatic garbage collector has many advantages. It can automatically define the way it has to go and collect garbage. The brush system installed on the machine will clean when the machine moves.

Dieu said he wants to equip his machine with a new function – pruning tree branches automatically. When moving to areas where there are tree branches obscuring the sight of travelers, or nearly broken branches, the machine will automatically activate the pruning system to chop down branches.

The primary school student admitted that this is complicated work which requires good programing and designing skills. Therefore, it will take Dieu more time to learn more to work on the machine.

Le Thi Ngoc Huyen, math teacher at the Vung Tau Bilingual Primary School, the instructor of Dieu, said Dieu is a very clever student. The boy observes everything happening around him, thinks about the problems and tries to find solutions to settle the problems.

“Our role is guiding students and helping them implement their ideas,” she said.

IYRC is a “playground” for primary, secondary and high school pupils from Hanoi, HCMC and Ba Ria-Vung Tau.

STEM education was introduced for the first time in Vietnam six years ago. In large cities, schools have been encouraging their students to access STEM education via many programs.

STEM should be core to education system: expert

STEM education can succeed at schools with poor conditions