Posted by: vivian on December 25, 2020 in Travel Comments Off on Thẳm Khến cave, natural masterpiece in Điện Biên 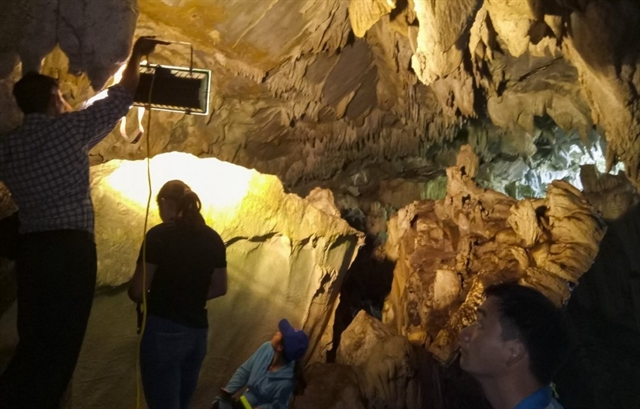 Coming here, visitors are immersed in wild nature and feel the insignificance of humans amid the magical hand of creation.

Cà Văn Phiến, chairman of Mường Ðun Commune People’s Committee, said according to the Thái ethnic language, “Thẳm” is a cave while “Khến” is a kind of vegetable with a bitter and sweet taste. This vegetable grows a lot in front of the cave entrance so “Thẳm Khến” means a cave with a lot of “Khến” vegetables.

Although the cave is quite close to the centre of the commune, around this area, there aren’t a lot of people living. Mountains, forests and a multitude of rugged rocky hills are deserted and so the cave almost remains intact.

The cave was recognised by the Ministry of Culture, Sports and Tourism as ‘national heritage’.

According to Nguyễn Hoàng Hiệp, deputy director of the provincial Department of Culture, Sports and Tourism, Tủa Chùa District has many advantages to develop tourism, with the strength of ecology and traditional ethnic culture.

Along with the preservation and promotion of the value of relics of Vàng Lồng Citadel and rugged mountain landscape, Thẳm Khến Cave can help promote the local economy. 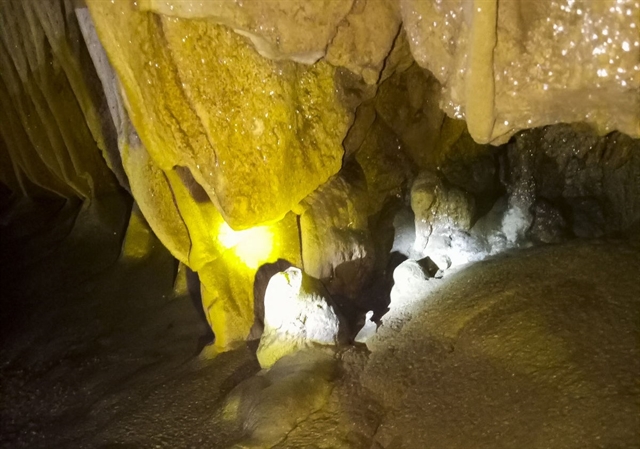 Thẳm Khến cave has recently recognised by the Ministry of Culture, Sports and Tourism as a national relic. — Photo vov.vn

To get to Thẳm Khến Cave, visitors travel to Mường Đun Commune People’s Committee, turn right 1.5km to Nà Xa Village and follow the trail about 600m to reach the cave.

The first cave has an S-shape, approximately 160m in length and is divided into three main compartments. While the second cave is shaped W, with a length of about 280m, divided into two compartments and two small nooks.

The first cave is located halfway up the hill, its entrance faces to the east. In the first compartment of the cave, the foundation has many slabs of stone, stalagmites and stone pillars. The deeper you go inside, the more vivid and splendid the cave is. The stalactites have shapes of animals such as elephants, dragons, phoenixes, turtles, and birds.

On the ceiling of the second compartment, there are yellow, grey, sharp, large stalactites which crash straight down the cave foundation. The tiny drops of water dripping from the tip of the stalactites make the whole compartment cool.

In the third compartment, the dome is flat, smooth and has fewer stalactites. The cave walls and floor are yellow with strange shapes.

There is a big stone pillar in the centre, surrounded by stone slabs that run from high to low like terraced rice fields. At the end of this compartment, there is a two-metre space and the natural light shining into the cave makes the landscape sparkle.

The second cave is located about 60m northeast of the first cave.

In the first compartment with a depth of about 160m, there are stalactites like ribbons stretching and falling to the cave floor, the contours are soft and smooth like the coral ranges under the sea, sometimes they are sharp with glittering crystals.

Its floor has stalactites with strange and various shapes. It looks like a giant oil painting of the wild natural landscape. The stalactites here are in the shape of rivers, streams, lakes and terraced fields. The two sides of the cave wall are long stone pillars.

In the next compartment, the ceiling and cave walls are stalactites like sharp claws. The floor features large long rocks heaped up into layers or appearing one after another with shapes of big bamboo shoots and mushrooms.

The cave contains many values ​​in terms of history, culture, science and tourism so it can become a place for scientific and historical researches, geography as well as ecosystem diversity.

Coming here, in addition to admiring the beauty of the cave, visitors can also experience the cultivation of crops of locals at the rocky hills, enjoy dishes of people in Tủa Chùa District such as home-brewed wine, mountain goat, Đà river fish, and black-bonned chicken. — VNS