Posted by: vivian on February 27, 2021 in Travel Comments Off on Nam Ô Reef, the green pearl of Đà Nẵng 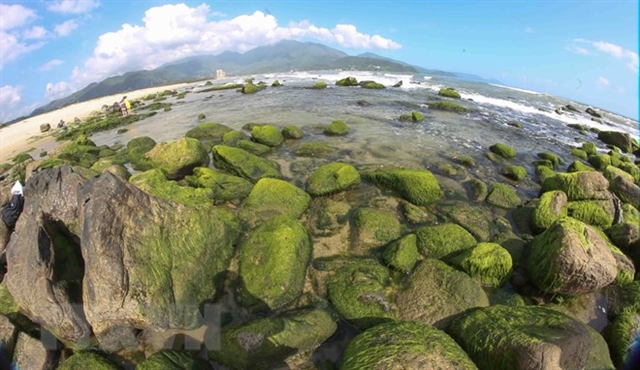 Nam Ô Reef, located in Liên Chiều District, Đà Nẵng City, is in the most beautiful time of the year, attracting many people and tourists. — VNA/VNS Photo Trần Lê Lâm

ĐÀ NẴNG — About 17km from central Đà Nẵng City, Nam Ô Reef is like a beautiful hidden gem, waiting to show its beauty when spring arrives.

Nguyễn Thành Nam has been leading tours in Đà Nẵng for more than a decade and he says most tourists cannot help but be amazed at the beautiful nature of Nam Ô Reef.

“During spring, when the tide recedes, rocks of different shapes and sizes reveal they are covered with green moss. They look so beautiful, just like green pearls.”

Born in Đà Nẵng and spending his childhood living near the reef, Nam has been coming to the place since it was just a pristine beach where fishermen in Nam Ô Village made their living.

“The name can be referred to as ‘The beach located in the south of Châu Ô’, it also means ‘southern gate’,” said the 35-year-old tour guide.

“Nam Ô Reef is about 500m long jutting out into the sea with a dense layer of rock hidden under the cool blue seawater. There’re many rock layers, stacked to form many unique shapes.”

“By lunar January, when the weather warms up, green moss begins to grow on the rocks. The best time to enjoy this moment is dawn when the sun comes up, the tide recedes, beautiful rocks formed in all shapes are revealed, mixed in the sand and covered with a carpet of green moss,” he added. 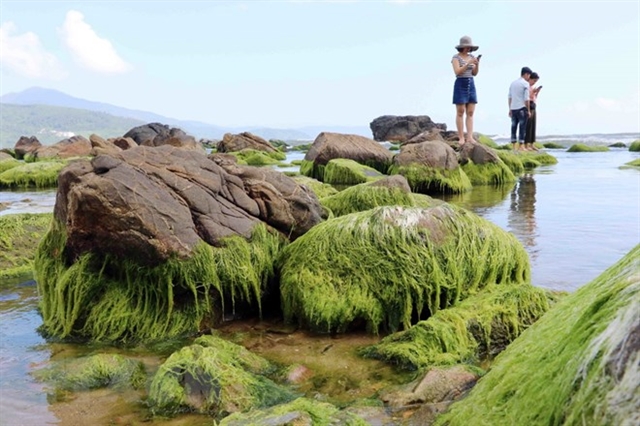 “Đà Nẵng has many beautiful beaches such as Mỹ Khê, Phạm Văn Đồng and Mân Thái. However, this is the first time my family has gone to Nam Ô.”

“The air here is so fresh. At this time of spring, the rocks are covered with a layer of green moss which is so charming.

“This is an opportunity for my whole family to experience the life of fishermen in the coastal fishing village. This place is also an ideal destination for photographers,” said Thư.

Speaking of photography, nearby the reef, Quang Thanh from HCM City was looking the best camera angles for his photos.

“I’m a photographer from Sài Gòn and I come here to capture the beauty of this place. It has to be spring if you want to get the best out of it.

“I took many pictures about the moss season in the central coastal provinces. In Nam Ô, large and small rocks mix with many different shapes and combine with the dawn light passing through the rocks, creating very vivid and unique photos,” he said.

After getting up in the early morning, you can buy delights from the sea caught by fishermen in the village.

Fresh squid, shrimp, and fish thrashing when being pulled from the sea and the enthusiasm of the local people give tourists an unforgettable experience.

This place is also home to the Nam Ô fish sauce village which has existed for more than 400 years. Last year, the village was honoured as the National Intangible Cultural Heritage. — VNS