Breaking News
You are here: Home » Travel » Hà Nội to set off fireworks at 30 places during Tết

Hà Nội to set off fireworks at 30 places during Tết

Posted by: vivian on December 1, 2019 in Travel Comments Off on Hà Nội to set off fireworks at 30 places during Tết 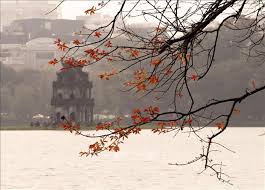 The Hồ Gươm (Sword) Lake in central Hà Nội is one of the city’s annual fireworks venues for the Lunar New Year celebration.  VNA/VNS Photo

HÀ NỘI The capital city will hold 15-minute firework shows across the capital to welcome Tết, the Lunar New Year festival, in January.

The fireworks will take place at six venues at high altitudes and 24 venues at lower heights across 30 districts in Hà Nội.

Each display will start as the clock hits midnight on January 25, marking the beginning of the Lunar New Year. Specific locations have yet to be announced.

The government has approved a seven-day Tết holiday that will start January 23, two days before Lunar New Year’s Eve. Government offices and state-owned companies will close until January 29. Schools and other businesses across the country usually follow the same break as government offices.

Tết is Việt Nam’s biggest holiday. It is the most important time for family reunions and gatherings. VNS