Posted by: vivian on November 20, 2020 in Travel Leave a comment

It is located in the centre of Phú Yên Province, in the communes of Sơn Long, Sơn Định and Sơn Xuân of Sơn Hòa District and a part of Tuy An District with lots of sunshine, wind and fog so it is called the “Đà Lạt of Phú Yên”.

The basaltic red land was formed by volcanic eruptions with an average altitude of 400m above sea level, creating cool weather year-round. 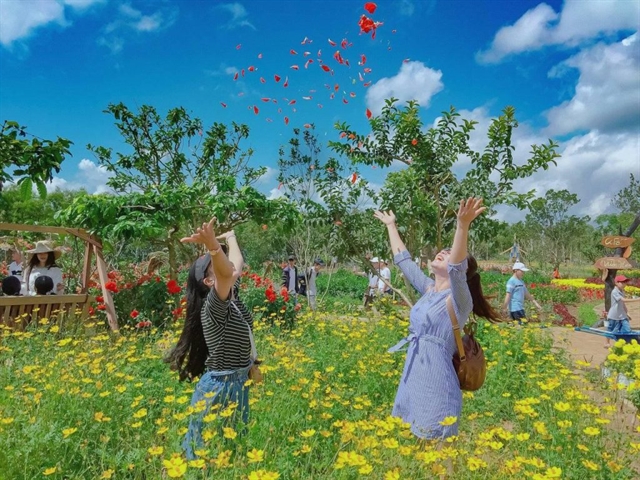 Vân Hòa Plateau is located on the old trade road connecting the coastal area of ​​Phú Yên with the vast western region of the province to the Central Highlands.

There are many historical revolutionary relics related to the national liberation struggle in the area, including the house to honour President Hồ Chí Minh and the Gò Thì Thùng tunnel relic which was recognised as a national historic site in 2008.

The house to honour President Hồ was built in 1969 in the place where Phú Yên people performed memorial services when he died. Since being named a national historic site in 2008, the house has been renovated.

Tourists often come here to offer incense to commemorate the late president, and learn history about the the resistance movement in Phú Yên during the war against the US.

Gò Thì Thùng tunnel was built in May 1964 and completed in August 1965 to serve the guerilla warfare. It is a 2km tunnel and 5m deep underground. The fortifications system on the ground is more than 10km in length.

As well as pleasant weather at Vân Hòa Plateau, the red Burmese grape gardens are a big tourist draw.

Elderly people in Lương Sơn Village, Sơn Xuân Commune say red Burmese grape trees naturally grew here long ago, but at that time there was almost no fruit. In the past decade, the trees have yielded rich fruit and they have a very strange red colour and are too sour to eat.

Photos of the Burmese grape trees with fruits hugging the trunk have since widely circulated on social networks and garden owners have gotten involved in tourism.

People consider the trees a godsend due to the money they bring in, so they don’t cut them down to get land to plant crops as before and instead seek seedlings to plant.

Every large garden has more than 30 trees bearing fruits, the owners of which can earn at least VNĐ200,000 (US8.7) per day from tourism.

In addition to the entrance fees, the garden owners have opened food and beverage services, and parking to serve guests.

Posing with a tree costs tourists a mere VNĐ10,000 (or less if travelling in groups), but it’s enough for the garden owner to maintain their garden.

“I like the wild beauty of Vân Hòa Plateau. Here I am immersed in wild flowers, breathing the fresh air and with very little cost, I also enjoy the garden of red Burmese grape trees,” said visitor Nguyễn Trọng Hòa from HCM City.

Vân Hòa has many wonderful streams and lakes such as Tía Stream, Cối Stream, Suối Phèn Lake and Vân Hòa Lake. In the early morning, mist spreads on the lake surfaces and over the mountains, creating a dreamy atmosphere.

This area has a traditional horse racing festival every spring and also hosts motorbike racing, kite flying and other sports. VNS