Posted by: vivian on November 6, 2017 in Travel Comments Off on Banking assets exceed 407 billion USD 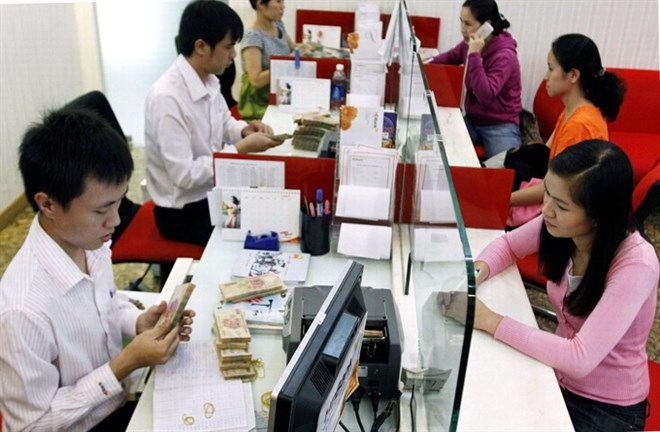 Clients and members of staff at HDBank headquarters in HCM City. (Photo: VNA)

Hanoi (VNA)  – Total assets of Vietnam’s banking system
reached more than 9.25 quadrillion VND (407.5 billion USD) by the end of
August, an increase of 8.79 percent over the beginning of this year, statistics
from the State Bank of Vietnam (SBV) show.

Total assets of finance and financial leasing companies were a little more than
134 trillion VND ending August, but this group witnessed the strongest asset
growth of more than 17.2 percent.

Only Co-operative Bank of Vietnam saw its assets fall by 1.36 percent.

Ending August, total charter capital of the whole banking sector hit 505.3
trillion VND, up 3.45 percent compared to the start of the year.

Finance and financial leasing firms, and joint-venture and foreign banks had
the strongest capital expansion of 8.3 percent and 7.7 percent, respectively.

Ending August, the average capital adequacy ratio
(CAR) of the whole system was 12.37 percent, much higher than the 9 percent
rate allowed by the central bank.

However, CAR of the State-owned bank group remained below 10 percent, standing
at 9.69 percent, while the similar number of the joint-stock commercial banks
was 11.12 percent.

Joint-venture and foreign banks have the highest CAR of more than 32 percent,
followed by finance and financial leasing companies of 18.3 percent.

CAR is expressed as a percentage of the bank’s capital to its risk-weighted
assets and is one of the main metrics used to promote the stability and
efficiency of financial systems.

However, bank experts warn that when BASEL II norms are applied, bank CAR may
decline by 2-3 percentage points due to an increase in the amount of their
risky assets. BASEL II also requires banks to maintain CAR of at least 8 percent.

Following the SBV’s roadmap, about 12-15 Vietnamese banks must apply BASEL II
by 2020, but 10 banks, including three State-owned banks (Vietcombank,
Vietinbank and BIDV),  participated in an
earlier pilot programme that started in September.

Moody’s Investors Service on October 31 upgraded its outlook for Vietnam’s
banking system to positive for the next 12-18 months from stable, reflecting
the country’s strong economic prospects and the positive outlook for most rated
banks.-VNA