Posted by: vivian on November 3, 2017 in Travel Comments Off on APEC 2017 brings Vietnam to new position: Kampuchea Thmey 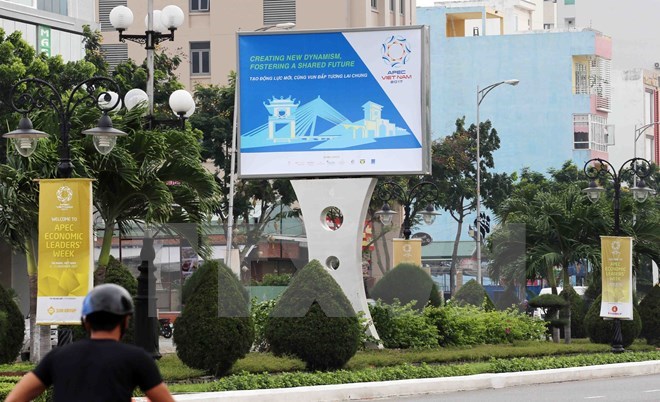 The APEC Economic Leaders’ Week will be held in the central city of Da Nang (Photo: VNA)

Phnom Penh (VNA) – Cambodia’s daily
Kampuchea Thmey (New Cambodia) on November 3 ran an article saying APEC 2017
activities will contribute to affirming the increasingly important role of the
forum and the position of Vietnam in regional and global governance.

Titled “APEC 2017: Vision and new position of Vietnam”,
the article held that through the APEC Year 2017, Vietnam has shown its dynamic,
pioneering role and responsibility as a member of the top important economic
forum in the Asia-Pacific region.

It underscored that what Vietnam has performed so far
has been highly evaluated by international communities, especially through its professional
organisation of events and positive initiatives to promote APEC cooperation and
connectivity.

This is the second time Vietnam has hosted an APEC
Year, when the world and the region are experiencing complicated developments,
and the APEC is striving to finish the Bogor Goals on trade and investment liberalisation
in 2020 amidst many difficulties hindering the process of globalization and economic
connections, noted the article.

It added that the APEC Vietnam 2017 is both a
challenge and an important chance for strengthening growth and connectivity in
Asia-Pacific as well as in the world.

Regarding the strategic vision of Vietnam’s foreign
relations through the APEC 2017, the paper held that this is an important
opportunity to affirm Vietnam’s brainpower and its foreign policy influence.

It said that the theme of the APEC 2017, “Creating New
Dynamism, Fostering a Shared Future”, has been applauded by the international
community.

The APEC 2017, which gathers 13 out of 25 strategic
partners of Vietnam, is a focus of the country’s foreign relations in the year,
it said.

The paper once again highlighted that Vietnam’s hosting
the APEC Year 2017 and its participation in the G20 Summit as a guest this year
has shown international friends’ trust in Vietnam and their appreciation of the
country’s cooperation initiatives.

APEC represents about 39 percent of the world’s
population and contributes 57 percent to global GDP and 49 percent of
international trade.-VNA

Previous: Struggle to manage Muong Phang forest
Next: VN to perform well at Asian U19 qualifier