Posted by: vivian on November 6, 2017 in Technology Comments Off on Internet users ignore network security 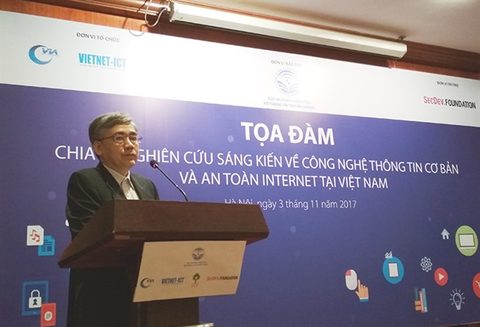 Nguyen Thanh Hai, director of the Authority of Information Security delivers a speech at the workshop.

Some 53 per cent of Vietnamese use the internet, according to the Authority of Information Security (AIS) under the Ministry of Information and Communications, ranking Viet Nam 16th among the top 20 countries with the highest number of internet users in Asia.

Internet users are mainly the youth, accounting for more than half of the entire population. If one considers just Facebook, the largest social network, Viet Nam ranks seventh among all countries in number of users, with a total of 64 million users logging onto the site every month.

“However, the popularity of the internet in Viet Nam comes with several challenges. Many Vietnamese users do not know how to protect themselves in the social network environment,” Nguyen Thanh Hai, AIS’s director, said.

Hai told the workshop, titled “Research on Digital Literacy and Digital Safety Initiatives in Viet Nam,” held in Ha Noi yesterday, that the Government should have a legal framework to enhance network security. The framework should specify and state regulations clearly to improve the situation.

Sharing the ideas, Nguyen Viet The from the Ministry of Public Security-cum-vice chairman of the Viet Nam Internet Association said Viet Nam takes the lead in terms of domain name in the Southeast Asian region.

“However, the issue of network security of Vietnamese internet users is very low. The latest study of Kaspersky showed that up to three-fourth of internet users in Viet Nam do not protect themselves online,” The added.

He said internet security, especially the network war, is a hot issue not only in Viet Nam, but also worldwide.

The Information Security Association and Viet Nam Internet Association have closely co-operated to increase people’s awareness on the issue as well as provide alarms to governmental websites, businesses and users on internet security.

“Internet users should follow the process of setting up new passwords to avoid information leak,” he noted.

At the beginning of 2017, the Symposium on Digital Citizenship and Safer Internet Day 2017 was held in Ha Noi to discuss issues, policies and practical activities related to internet safety in Viet Nam and to build a programme to raise awareness about the need for safe behaviour when using the internet.

As a continuation of the symposium, the workshop was organised as part of a collaboration on internet safety initiatives between Vietnet Information Technology and Communication Centre and the Research Centre for Management and Sustainable Development. — VNS