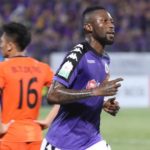 After a 0-2 “misfortune” conceded at Saigon’s Thong Nhat stadium, the odds-on favourites for the 2018 V.League trophy, Hanoi FC, rediscovered their rhythm by sealing a resounding 5-2 win at home over SHB Da Nang in the 15th round of play last weekend. Substitute Hoang Vu Samson scores a double in Hanoi FC’s 5-2 win over SHB Da Nang.  In ... END_OF_DOCUMENT_TOKEN_TO_BE_REPLACED

June 25, 2018 Comments Off on Hundreds of people practice yoga in HCM City 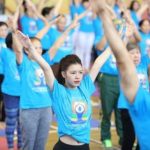 Hanoi FC put their humiliating 5-2 defeat to Saigon FC behind them, as manager Chu Dinh Nghiem’s side came from behind to taste victory over SHB Da Nang by the same score at home in the 15th round of the 2018 Nuti Café V.League on June 23. Hanoi players celebrate a goal against SHB Da Nang.  Hanoi produced a blistering ... END_OF_DOCUMENT_TOKEN_TO_BE_REPLACED 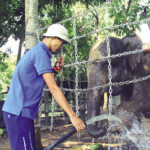 VietNamNet Bridge – The project on conserving Dak Lak elephants by 2020, capitalized at VND80 billion, has brought positive changes in the province. One elephant is pregnant and is expecting a baby in 12 months. Dak Lak spends VND80 billion on the elephant conservation program For decades, H’ Bang Nang, a 38-year-old elephant owned by Y Mu Bkrong in Lien ... END_OF_DOCUMENT_TOKEN_TO_BE_REPLACED 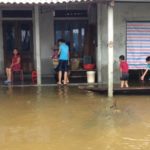 The Government has issued Resolution 76/NQ-CP on natural disaster prevention and climate change adaptation. Its specific goal by 2025 is reducing 30 percent of human losses caused by natural disasters with similar intensity and scale to those occurring in 2015-2020. Authorities at all levels, organisations, and households across the country will receive full information on natural calamities, while training courses ... END_OF_DOCUMENT_TOKEN_TO_BE_REPLACED

June 24, 2018 Comments Off on Hi-tech application touted as solution to climate change adaptation

Vietnam has been promoting the application of high technologies in agriculture production as part of efforts to adapt to climate change and strive towards sustainable agriculture development, heard the Asia-Europe Meeting (ASEM) in Mekong Delta city of Can Tho on July 19.  Participants to the event are debating impacts caused by climate change on the regional agriculture as well as ... END_OF_DOCUMENT_TOKEN_TO_BE_REPLACED

June 24, 2018 Comments Off on Don Village struggles to keep elephants for tourism 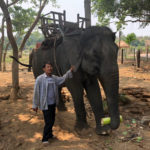 Y Nha, 37, is facing difficulties finding foods for his elephant which is working in the tourism services at Don Village Tourist Site in the Central Highlands province of Dak Lak. Y Nha besides his elephant Kham Mon “Our Kham Mon can earn enough for his food during holiday seasons when he works hard transporting tourists,” Nha said. “But during ... END_OF_DOCUMENT_TOKEN_TO_BE_REPLACED

June 24, 2018 Comments Off on The unplanned dumpsite

Waste is being stacked up, day in day out, at several seaports in the country, as if Vietnam were a dumpsite of the world.  Port operators now find themselves in a quagmire, as tens of thousands of containers are being abandoned there, aggravating port congestion on one hand and adversely affecting port operators’ business efficiency on the other.  The key ... END_OF_DOCUMENT_TOKEN_TO_BE_REPLACED