Posted by: vivian on August 14, 2018 in Sports Comments Off on Vietnam’s U23 football team ready to play Pakistan at ASIAD 2018

Vietnam’s U23 football team and its coach Park Hang Seo on August 13 trained to prepare for a game with Pakistan on August 14’s afternoon in Group D in the men’s football at the Asian Games (ASIAD) 2018 in Indonesia. 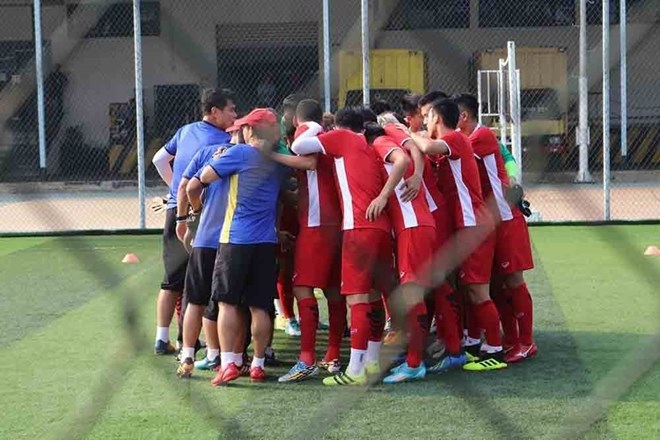 Eighteen players and two goalkeepers joined the training which focused on playing in tight spaces.

Speaking with the media before the training session, Park affirmed that the players are in good spirit without any injuries.

“Among teams in Group D, I worry the most about Pakistan as over the past three years, Pakistan was banned from international football by FIFA so I don’t have much information about them but I’ve used my connections to learn more about them,” said Park.

According to Park, the upcoming match against Pakistan will be very important if Vietnam wants to qualify for the next phase, so his team must aim for three points.

Vietnam left for Indonesia on August 11 and have undergone several training sessions to prepare for their first game.

Vietnam tested their line-up at the recent U23 International Football Championship – VinaPhone Cup 2018 in Hanoi, and went on to claim the title against Uzbekistan, Oman and Palestine.

At the ASIAD 2014 in the Republic of Korea, Vietnam, coached by Japan’s Toshiya Miura, made it through to the knockout stages where it was beaten by the United Arab Emirates.

Leading Pakistan is Jose Antonio Nogueira, a coach with more than 20 years of experience working in his native Brazil and Asian clubs including Nagoya Grampus Eight of Japan and Al-Ahli Saudi of Saudi Arabia.

To prepare for the event, Pakistan held a two-week training camp in Bahrain where the team recorded a draw and a loss against two of the country’s top clubs.

Following the game against Pakistan, Vietnam will take on Nepal on August 16 and then Japan on August 19.

The men’s football will finish on September 1. It will feature 26 teams in two groups of five and four groups of four. The top two teams from each group and the four best third-place teams will advance to the second round.-VNA