Posted by: vivian on August 13, 2018 in Sports Comments Off on Vietnam’s football squad of 20 players for ASIAD announced

Head coach Park Hang-seo has announced the men’s football squad of 20 players who will compete in the 2018 Asian Games (ASIAD) in Indonesia later this month. 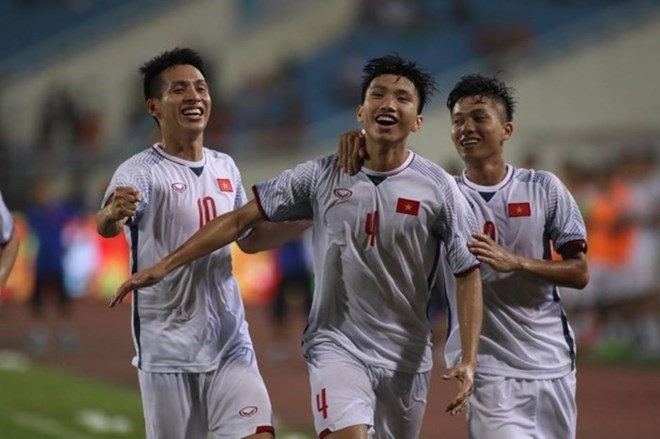 Defender Doan Van Hau celebrates after scoring the winning goal against Oman 1-0 in the U23 International Football Championship – Vinaphone Cup 2018. He is one of the 20 players to compete in the 2018 Asian Games (ASIAD) in Indonesia later this month. (Photo: 24h.com.vn)

The decision was made right after Vietnam’s U23 team triumphed the U23 International Football Championship – Vinaphone Cup 2018, sponsored by the Vietnam Posts and Telecommunications Group (VNPT), on August 7.

Footballers Nguyen Van Duc and Pham Xuan Manh from Song Lam Nghe An FC also have their names on the list.

Among the players, three are aged over 23 – Nguyen Van Quyet, Nguyen Anh Duc and Do Hung Dung – in accordance with the rules of the Games.

The team is scheduled to depart for southern Binh Duong province for further training before heading to Indonesia for ASIAD on August 11.

On August 7, Vietnam’s U23 team won the U23 International Football Championship – Vinaphone Cup 2018 after a 1 – 1 draw in the last match against Uzbekistan. With two wins and a draw, Vietnam walked away with 20,000 USD in cash. Earlier, they beat U23 Oman 1-0 and defeated Palestine 2-1.

The event was part of the team’s preparations for ASIAD in which Vietnam will be in Group D alongside Japan, Pakistan and Nepal.

The men’s football will kick off on August 14 and will finish on September 1. It will feature 26 teams in two groups of five and four groups of four. The top two teams from each group and the four best third-place teams will advance to the second round.-VNA