Posted by: vivian on September 15, 2017 in Sports Comments Off on Vietnamese female karate martial artist ranks in world’s top 10 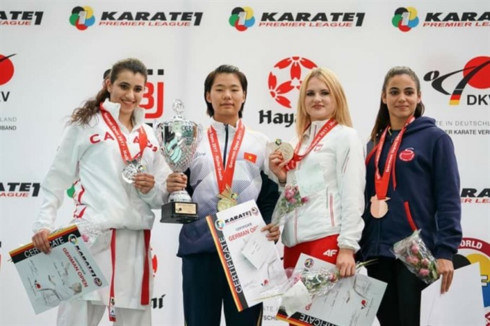 It is the highest ranking ever achieved by a Vietnamese karate martial artist at a combat event.

Earlier, Vietnam’s Nguyen Hoang Ngan was one of the world’s best athletes in a performance event. She won the world gold medal in 2008.

Ngoan won a gold medal at the Karate 1-Premier League in Halle/Leipzig, Germany, on September 10, making her the first Vietnamese martial artist to win the highest title in this prestigious tournament.

She defeated Jumaa Haya of Canada in the final of the women’s 61kg category.

With this result, Ngoan has a total score of 2,300 and ranks eighth in the world.

The Karate1-Premier League is one of the most important tournaments that athletes participate in to collect points to qualify for the Tokyo Olympics in 2020. The event attracted participation from more than 1,380 athletes from 87 countries.