Posted by: vivian on August 29, 2018 in Sports Comments Off on Vietnamese diplomats wish footballers the best ahead semifinals

A delegation of the Vietnamese Embassy and Vietnam’s Mission to ASEAN visited Olympic Vietnam footballers and coaching staff in Jakarta, Indonesia, on August 28 to congratulate the team on its victory and give them the best wishes for the upcoming semifinals. 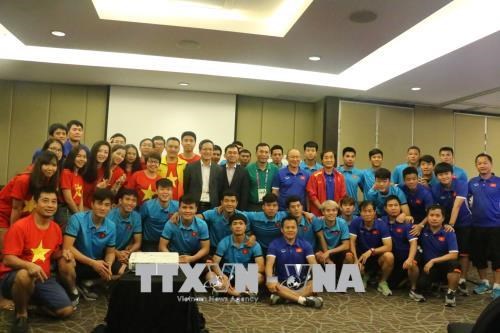 Ambassador to Indonesia Pham Vinh Quang and head of Vietnam’s Permanent Mission to ASEAN Tran Duc Binh (both in black, centre) pose for a photo with the Olympic Vietnam football team.

At a brief meeting with the players and head coach Park Hang-seo, Ambassador to Indonesia Pham Vinh Quang and head of Vietnam’s Permanent Mission to ASEAN Tran Duc Binh congratulated the Olympic Vietnam team on their historic win over Syria to reach the Asian Games (ASIAD) 2018’s semifinals for the first time, bringing joy and pride to people across Vietnam.

Quang said he believes that the players will well deploy tactics of coach Park Hang-seo and the coaching board to play with confidence and bravery in the semifinal match against the Republic of Korea. The entire nation and the Vietnamese community in Indonesia give full support to the team, he said.

According to Duong Vu Lam, head of the national sport delegation to ASIAD 2018, the recovery of Vietnamese footballers is quite challenging. It is very important for the squad to quickly bounce back from the previous games as the further they go, the stronger their rivals are, he explained, adding that the recovery time for the players between the quarterfinals and semifinals is very short.

However, the team’s doctors have made their best to take care of them and allow them to be in the best possible condition before the match against the RoK, he noted.

Vietnam booked a spot in the semifinals of the men’s football event at the ongoing ASIAD 2018 in Indonesia after beating Syria 1 – 0 in the extra-time quarterfinals on August 27.

The only goal was scored in the 108th minute by Van Toan (Number 8), who replaced striker Cong Phuong in the 82nd minute.

Vietnam will take on the RoK, who defeated Uzbekistan 4-3, at 4:00pm on August 29 (local time). This is the first time Vietnam has entered the semifinals of an ASIAD.–VNA

Previous: Is publishing monopoly is to blame for shortage of textbooks?
Next: New water treatment system uses no chemicals, electricity, filter cartridges