Posted by: vivian on August 27, 2018 in Sports Comments Off on ASIAD 2018: Six Vietnamese athletes qualify for Pencak Silat finals

Six Vietnamese athletes qualified to the final round of Pencak Silat on August 26 at the ongoing 2018 Asian Games (ASIAD 2018) in Indonesia. 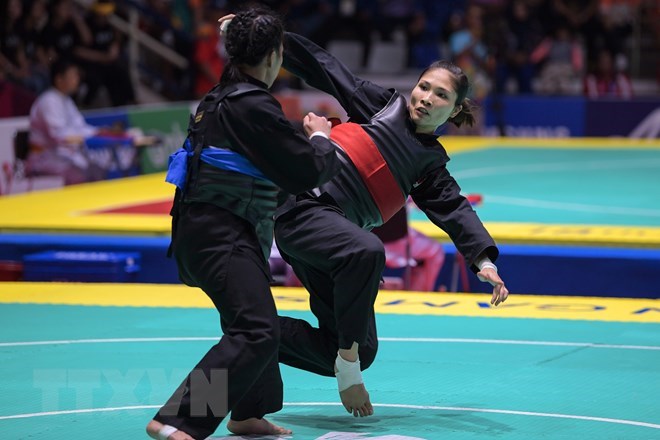 Pencak Silat athlete Hoang Thi Loan (right) in the women’s under 60 kg quarterfinals at the ongoing ASIAD 2018 in Indonesia.

Also in the sport, Pham Tuan Anh and Pham Duy Tuyen won bronze medals in the in the men’s under 70 kg and under 90 kg categories while Hoang Thi Loan grabbed another in the women’s under 60 kg event on the same day.

Meanwhile, runner Quach Thi Lan made it into the final round of the women’s 400m hurdles after reaching the finish line in the second place with the total time of 55.74 seconds.

In the women’s long jump, Bui Thi Thu Thao also qualified to the final round.

Sprinter Le Tu Chinh, renowned as Vietnam’s “queen of speed”, could not make to the final stage after finishing 12th place in the women’s 100m with 11.76 seconds.

In Karate, Ho Thi Thu Hien failed to bring home a medal when she was beaten 1 – 4 by Yin Xiaoyan from China at the women’s under-61kg quarterfinals.

China kept its first position with 76 gold medals, followed by Japan with 40 golds and the Republic of Korea with 27 golds. – VNA