Though the Olympic Vietnam squad lost 1 – 3 to the Republic of Korea in the ASIAD 2018 men’s football semifinals on August 29 but they have left great impression on international media with their fighting spirit until the last minute. 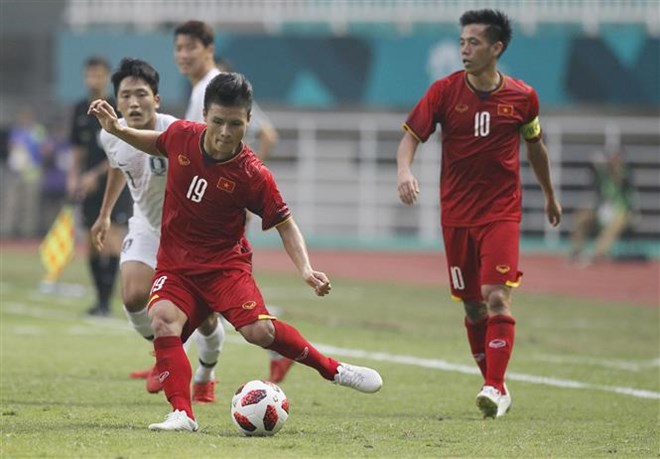 The Olympic Vietnam squad lost 1 – 3 to the Republic of Korea in the ASIAD 2018 men’s football semifinals on August 29 but their run has been lauded by international media.

On its Twitter account, the Asian Football Federation (@theafcdotcom) described Vietnam’s journey in the Asian Games 2018 in Indonesia as “excellent”.

The ASEAN Football Federation on its official website called Minh Vuong’s freekick into the upper left net in the 70th minute “fabulous” that left Korean goalkeeper Cho Hyun-woo no chance.

“Vietnam did grab a consolation courtesy of a fine effort by substitute Tran Minh Vuong, who lined up a 25-yard freekick before curling away a sublime effort that had Cho Hyun-woo – South Korea’s hero at the 2018 FIFA World Cup – beaten all ends up,” Fox Sport Asia wrote.

The Fox Sport Asia ran a story on August 29 entitled “Vietnam’s brave run ended by Korea Republic,” saying “Vietnam’s inspirational run at Asian Games 2018 finally came to an end” as the RoK advanced to the final.

Against a team like the RoK, “the Vietnamese refused to give in and actually created a number of good openings, but were just lacking that extra bit of quality,” it said.

“While they may have been defeated, Vietnam certainly gained plenty of admirers along the way and still has a chance to claim the bronze medal” in the third place playoff, it wrote.

“Even though they trailed by three clear goals, Vietnam showed some fighting spirit to at least reduce the deficit when Tran Minh Vuong’s free kick in the 70th minute made it 3-1.”

Vietnam will take on the United Arab Emirates to fight for the bronze medal on September 1. –VNA