Posted by: vivian on August 16, 2018 in Sports Comments Off on ASIAD 18: Vietnam defeat Pakistan 3-0 in men’s football

Vietnam’s Olympic men’s football team beat their Pakistani rivals 3-0 in the first group match in men’s football of the Asian Games 2018 (ASIAD 18), which took place in Indonesia on August 14. 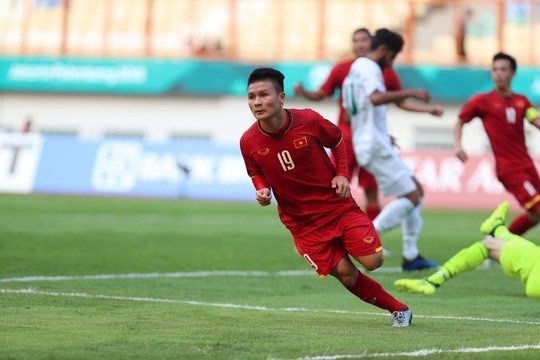 Midfielder Nguyen Quang Hai opened the score for Vietnam at the 20th minute, while the second goal was earned by team captain Nguyen Van Quyet near the end of the first half.

Nguyen Cong Phuong made a goal at the 73rd minute to settle a 3-0 victory for the Vietnamese squad. The midfielder previously failed twice to score from penalty kicks.

With the victory, Vietnam takes the lead in Group D with three points, earning them a greater chance to qualify for the next phase.

The men’s football will finish on September 1. It will feature 26 teams in two groups of five and four groups of four. The top two teams from each group and the four best third-place teams will advance to the second round.