Posted by: vivian on November 7, 2017 in Society Comments Off on High tides flood HCM City streets

Many streets in HCM City were submerged under 1.65 metres of water due to rising tides in the early morning on Monday, causing traffic jams and flooding of residents’ houses and stalled motorbikes. 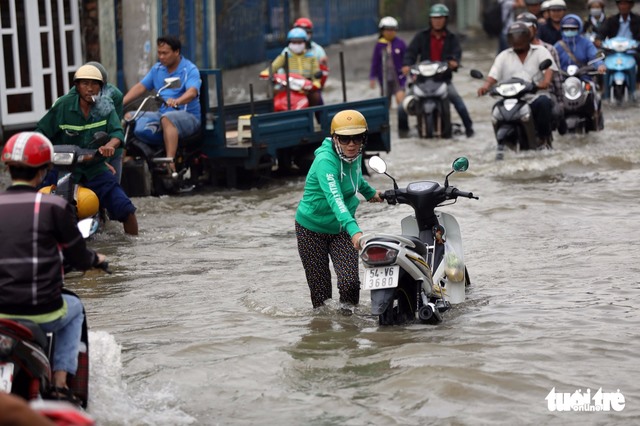 Drivers struggle to deal with flooding caused by rising tides on Le Van Luong St in HCM City’s Nha Be District in the early morning of November 6. — Photo tuoitre.vn

Transportation and business activities in flooded areas were seriously affected, flooding many houses and damaging furniture.

Several spots in the city were affected by heavy rains or rising tides.

Earlier, the Southern Hydro-Meteorological Station said tidal peaks could reach a historic tide level of 1.68m, with a tidal peak of about1.65m in the morning and about 1.67m in the evening on November 6.

According to the station, the tides remain high and a tidal peak could reach 1.64m in the early morning and 1.63m in the evening on November 7. — VNS

Previous: Ho Chi Minh City's Chinatown market could get facelift
Next: Whitney and Prince items up for auction