Posted by: vivian on August 29, 2018 in Environment Comments Off on USAID promotes Chi initiative to drive down demand for rhino horn

The USAID Wildlife Asia on Tuesday launched the third phase of the Chí initiative, a communication programme to help decrease consumer demand for rhino horn in Việt Nam. 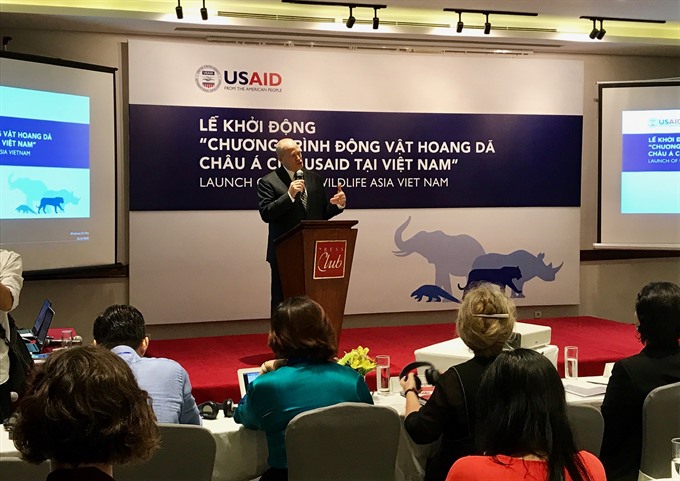 Craig Hart, Acting Mission Director of the US Agency for International Development Mission in Việt Nam, speaks at the launching ceremony of the Chí initiative’s phase 3 in Hà Nội on Tuesday.

“The US Government remains committed to collaborating with countries around the world to combat wildlife crime and end demand for illegal wildlife products,” said Craig Hart, Acting Mission Director of the US Agency for International Development Mission in Việt Nam.

“As part of USAID Wildlife Asia and with strong commitment from Vietnamese partners, we will continue to explore innovative behavioural change solutions and work to further reduce illegal wildlife consumption in Việt Nam,” said head of TRAFFIC in Việt Nam Sarah Ferguson.

Demand for rhino horn in Asian countries, including Việt Nam, drives the illegal poaching of rhinos in Africa, putting the species in jeopardy of extinction. The Government of Việt Nam has made strides in countering wildlife crime, notably with a new penal code that features stricter penalties for the possession and trade of illegal wildlife products. Despite these efforts, Việt Nam is still considered a major consumer market and transit hub for rhino horn, according to the USAID Wildlife Asia.

A significant sustained decline in self-reported rhino horn use was found between 2014, 2016 and 2017 surveys, from 27.5 per cent to 6 per cent and 7 per cent respectively. The data indicates a steady decline of reported consumption since 2014 for Hà Nội and HCM City, but then an increase in 2017.

This reduction in self-reported use, however, was not found to be correlated with a reduction in trafficking of the commodity. In fact, the number of seizures of trafficked rhino horn continued to increase in 2016 and 2017. This indicates the trafficking and supply of illegal rhino horn into Việt Nam continues, but at the same time reflects the increased law enforcement effort by the Vietnamese Government, according to the TRAFFIC. — VNS