Posted by: vivian on August 16, 2018 in Environment Comments Off on Unlicensed hydropower projects damaging environment in Sa Pa

VietNamNet Bridge – Sa Pa in northwestern Vietnam has carried out dozens of hydropower projects which are now seriously devastating the environment. 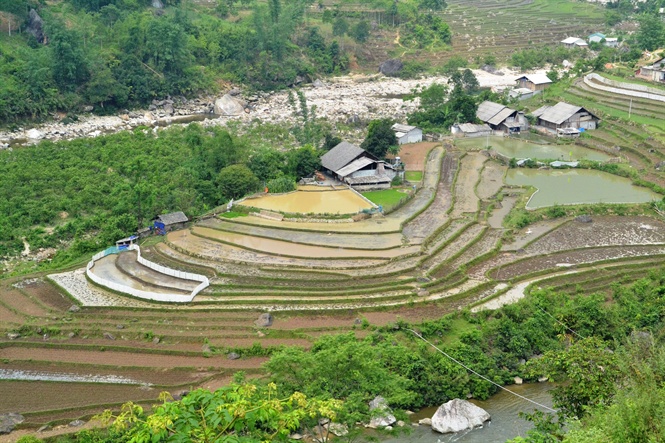 Sa Pa is a favorite destination point for travelers

In 2000, Ban Ho, with its scenery and culture of ethnic minorities, was the ideal destination for travelers who came to Sa Pa. There were nearly 30 homestays in Ban Ho at that time.

However, Muong Hoa Stream and La Ve Waterfall, which were always full of visitors, now have nothing except rocks and gravel.

According to Dao A Khoi, chair of Ban Ho Commune, there are hydropower plants in the locality, including Su Pan 1, Su Pan 2, Nam Toong, Seo Chong Ho. There is also another hydropower project under construction called Ban Ho.

The beautiful landscapes have been damaged.  If counting projects under research, Sa Pa has 20 hydropower projects with total capacity of 345.6 MW.

Lo A Quynh in Ban Ho commune, a homestay owner, said very few travelers come to Ban Ho now. Homestay developers had to shut down and take other jobs. There are only several homestays left.

Dao Thi Tem felt lucky as her house was near La Ve waterfall, a favorite destination of travelers. She decided to borrow money from relatives to build a house for travelers. However, since the day Nam Toong hydropower plant was put into operation, the waterfall has been dry.

To many people’s surprise, many of the hydropower plants are illegal. These include Ban Ho hydropower project, developed by the Hanoi-based Viet Long Industry JSC.

According to Khoi, on December 1, 2017, the commune authorities received a dispatch from the Lao Cai provincial planning and investment department about Ban Ho project.

The local authorities said they disagreed on the project implementation because there were many hydropower plants in the locality.

Khoi received a call from a deputy chair of Sa Pa district who asked him to “create favorable conditions for the investor to implement the project”.

Despite strong protest from locals, small hydropower plants are still being built. Viet Long plans to increase plant capacity from 5 MW to 9 MW, which means nearly 30 hectares of land in Ban Ho commune will be taken away.

Sa Pa, a township and capital of Sa Pa District in Lao Cai Province in the northwest,  is a favorite destination point for travelers.

Trees frozen over in Sapa