Breaking News
You are here: Home » Business » VN must improve quality of labour force for EVFTA

VN must improve quality of labour force for EVFTA

Posted by: vivian on September 18, 2019 in Business Comments Off on VN must improve quality of labour force for EVFTA 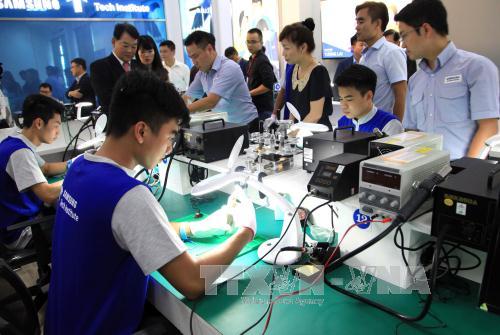 Students train in a joint programme between the Hanoi Institute of Vocational Traning and Samsung. – VNA Photo

HÀ NỘI — The EU-Vietnam Free Trade Agreement (EVFTA) offers many opportunities to Vietnamese workers and just as many challenges. The country’s labour force must find ways to improve its quality in order to produce products that adhere to stricter standards in European markets, said policymakers and labour experts at a conference in Hà Nội on Tuesday.

President of the Vietnam Chamber of Commerce and Industry (VCCI) Vũ Tiến Lộc said Viêt Nam’s labour force quality still left much to be desired. A recent VCCI survey showed 85 per cent of businesses in the country were facing difficulties finding skilled workers and managers. A lack of skilled workers has discouraged high-tech companies to make heavy investments in Việt Nam.

In addition, companies will have to implement a number of changes to their current labour policies to meet with the EVFTA’s labour standards, such as making commitments to ensure workers’ rights to collective bargaining, eliminate forced and child labour as well as workplace discrimination.

The EVFTA is an opportunity for the Vietnamese labour force to grow but they must be equipped with the right skills to take advantage of such opportunities, said Simon Matthews, Country Manager of Vietnam, Thailand and the Middle East under ManpowerGroup, a leading staffing firm based in the US.

The trade deal was expected to create between 18,000 to 19,000 jobs each year for the next ten years, with the majority of jobs in textile, footwear and furniture manufacturing as tariffs were set to be lifted for Vietnamese products exported to the EU market.

“Labour force quality remains an obstacle for Việt Nam to overcome. European firms require from employees both technical and language skills and they are hoping to see such demands addressed by the Government,” said Nguyễn Hải Minh, Vice Chairman of EuroCham Vietnam.

Matthews said developing a skilled labour force is a top priority for Việt Nam in the country’s effort to integrate into the global economy. He urged firms to start building human resource strategies to train and retain skilled workers.