Breaking News
You are here: Home » Business » Vietnamese steel in the spiral of international lawsuits

Vietnamese steel in the spiral of international lawsuits

Posted by: vivian on August 28, 2018 in Business Comments Off on Vietnamese steel in the spiral of international lawsuits

Fifty percent of the cases of safeguard investigations, anti-dumping and anti-subsidy are filed against the steel industry. 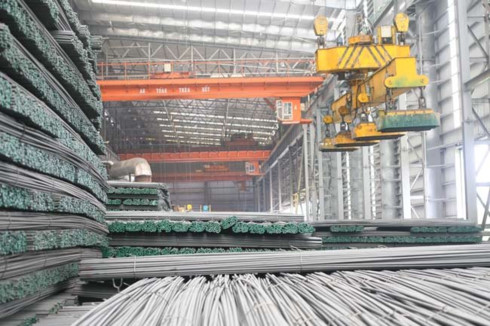 While Vietnam has slapped safeguard tariff measures on imported color-coated steel sheets, steel billets and long steel products in line with two separate tax decisions made in 2016, the country has been coping with eight major lawsuits initiated by the U.S., Canada, Australia, the EU and Indonesia, etc.

Of the 78 anti-dumping lawsuits brought against Vietnam in the past two years, 37 cases were related to the steel industry, said Chu Thang Trung, deputy head of the Trade Remedies Authority of Vietnam under the Ministry of Industry and Trade, at a recent conference on trade remedies. If the tax evasion and anti-subsidy cases were included, the number of lawsuits involving the steel industry would be even larger.

There is, however, no official explanation for the following question: Why has the steel industry, not any other, been faced with as much as half of the anti-dumping cases? Many trade remedies experts believe the biggest reason is that steel is considered a “staple food” for industrial production due to its importance, value and ability to leave a great impact on the global industry.

Furthermore, China is the world’s No. 1 steel producer whose production significantly affects many other nations (through direct exports or factory development overseas, exports of technology and raw materials…) and have a tremendous influence on manufacturers and workers in the host countries.

In the past three months, the US has constantly initiated lawsuits which are directly or indirectly related to the local steel industry. On May 21, the U.S. Department of Commerce (DOC) released its final decision on an anti-dumping investigation into Vietnam’s coated steel sheets and cold-rolled steel that is originally China’s hot-rolled steel, with extremely heavy duties (a 199.6% anti-dumping rate for steel sheets, and 199.3% for cold-rolled steel).

A number of US steelmakers in mid-June sent a petition to the DOC seeking an investigation into and measures against tax evasion and subsidies for cold-rolled steel imported from Vietnam, which is suspected to have a Chinese or Taiwanese origin. The DOC will soon decide whether to conduct such an investigation or not.

Earlier, this agency has reached the final decision on a 25% tariff on steel imported from countries around the world (except South Korea) to the U.S. market. Vietnam has applied for exemption from such tariff, but the desired result has not been obtained.

Most recently, the European Union (EU) has decided to temporarily levy safeguard tariff measures on steel imports in the form of quotas from 10 nations, including Vietnam.

The products affected by this decision are cold-rolled alloy and non-alloy steel (aluminum), alloy-coated steel plates, stainless sheet plates and strips, if their exports to the EU exceed the quotas. Previously, Canada had made a decision on slapping duties on color-coated steel sheets imported from China, Vietnam and Indonesia.

In the opposite direction, the Ministry of Industry and Trade recently issued two decisions on tax imposition for trade remedies as mentioned above, and has prepared dossiers for initiation of an anti-dumping investigation into coated steel sheets shipped in from China.

A representative from the division in charge of compliance and execution under the DOC recently said the number of anti-dumping and anti-subsidy investigations started by the DOC has steadily risen over the past three years, amounting to 110 cases. As of this May, the DOC had more than 400 anti-dumping and anti-subsidy orders in effect. Of these, 10 are related to Vietnamese goods, mostly steel.

Although Vietnam’s steel industry exports less than 10% of its annual output, of which only 15% is bound for the U.S. and 10% for the EU, trade remedies lawsuits thereof should not be overlooked. Nguyen Thi Thu Trang, director of the WTO Center under the Vietnam Chamber of Commerce and Industry (VCCI), says the U.S. and the EU remain the two largest export markets for Vietnamese goods in general. Neglecting a case may lead to serious chain effects in the future.

For example, in the case of Canada launching anti-dumping and anti-subsidy investigations into cold-rolled steel products from China, South Korea and Vietnam, there are two Vietnamese respondents (Posco and CSVC).

According to the procedures, these two companies have to reply to the questionnaire sent by the Canadian investigation agency but they have refused to. Consequently, the Canadian party will likely determine that Vietnam has practiced dumping with this product when their preliminary conclusions of the case came out in September.

Many exporters choose to take more proactive steps. For instance, they fully cooperate with the investigating authorities of the countries initiating the cases—response to their questionnaires—for transparency of information to enjoy the most reasonable tax rates.

The decisions of the petitioners are based on in-depth analysis, case files (electronic filing systems) and the system of administrative protection orders (as in the U.S.). These available data will not be beneficial to businesses if they refuse to join the cases or just do it perfunctorily.

Another way is to prove the origin of their goods. For example, they need to provide proofs that the input steel used to make their finished products does not originate in China (in the case of anti-tax evasion lawsuits), not subsidized, or not sold below the normal price.

Even when exporters are not on the list of mandatory respondents, they may still voluntarily get engaged to enjoy a separate tax rate.

There have been cases where some enterprises followed such lawsuits even though they had not exported them yet, so that they may request the anti-dumping decision-making bodies to annually review the cases for the best tax rates when they enter the market in the future.