Breaking News
You are here: Home » Business » Vietcombank looks to raise pre-tax profit by 12 per cent in 2021

Posted by: vivian on January 12, 2021 in Business Leave a comment 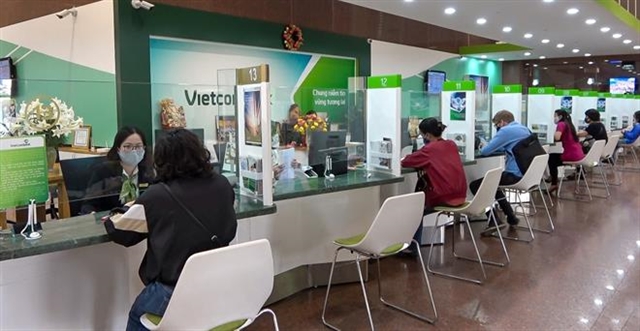 Transactions at Vietcombank. The bank also aims to raise its total asset by 6 per cent and mobilised capital by 8 per cent while the credit growth is expected to pick up 12 per cent. — Photo vietcombank.com.vn

HÀ NỘI — The Joint Stock Commercial Bank for Foreign Trade of Việt Nam (Vietcombank) hopes to increase its pre-tax profit by 12 per cent year-on-year to VNĐ25.2 trillion this year, said Director General Phạm Quang Dũng at a conference in Hà Nội on Monday.

The bank also aims to raise its total assets by 6 per cent and mobilised capital by 8 per cent while credit growth is expected to pick up 12 per cent, he said. Non-performing loans (NPLs) will be maintained at below 1 per cent and net interest margin (NIM) at 3.1 per cent.

Last year, Vietcombank launched a number of credit programmes to support borrowers affected by the COVID-19 pandemic and natural disasters, said Chairman Nghiêm Xuân Thành, adding that it has made a total of five lending interest rate cuts in 2020 to bring the rate to among the lowest in the country. More than VNĐ441.7 trillion (US$19 billion) worth of loans was dished out on reduced interest rates.

The bank has donated about VNĐ350 billion to social welfare activities, of which more than VNĐ40 billion was contributed to the COVID-19 response.

Vietcombank earned close to VNĐ22.53 trillion in pre-tax profit and about VNĐ23.07 trillion in consolidated profit in 2020, slightly lower than in 2019.

It provided a total of nearly VNĐ110 trillion worth of loans last year, with credit growth reaching 13.95 per cent, the highest among domestic banking institutes, compared to the sector’s average of 8 per cent.

The NPL rate was kept at 0.61 per cent, the lowest among banks.

It contributed VNĐ9 trillion to the State budget. With stock market shares standing at VNĐ100,000 each on January 6, Vietcombank became the largest listed company, with capitalisation of about VNĐ390 trillion. — VNS