Posted by: vivian on April 14, 2019 in Business Comments Off on Suspended projects need solutions 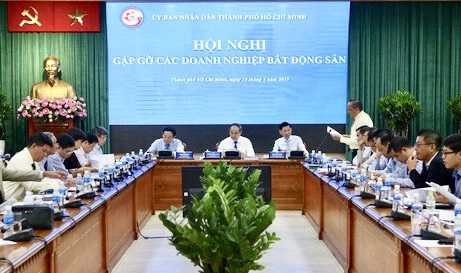 Speaking at a meeting with city leaders, Lê Hoàng Châu, chairman of HoREA, asked the city to publicly list 124 of the suspended construction projects that have been allowed to resume progress. The association said the developers of the projects had not been informed about their status and need see public information.

The projects were suspended after previous inspections conducted by both city and state officials.

In addition to the 124 projects that have been allowed to resume, more than 30 other projects are still suspended and are awaiting final inspection results.

Châu asked the city’s People’s Committee and the Government Inspectorate to speed up the inspection of these 30 remaining projects.

HoREA also urged the city government to make a decision on the fate of about 300 public land lots that are subject to land-use recovery.

The association said the city should also classify these public land lots in different categories so that appropriate plans could be made.

If serious signs of violation have been found, it must be resolved seriously according to the law, the association recommended.

It also suggested that agencies should look at each case individually and take into account the history of the land use, ensure the legitimate rights and interests of businesses and people, and prevent property losses.

The city government last month informed investors that the previously suspended 124 construction projects had been permitted to continue.

HoREA noted that further extensions would cause the investors of these projects to face losses from higher costs and rising loan interest rates, while they miss out on business opportunities.

The number of stalled projects had resulted in a sharp fall in the number of houses available for sale, damaging the local real estate market, HoREA added.

Real estate enterprises in HCM City were concerned that many projects had not had their issues resolved quickly by agencies, he said.

This had led to a reduction in the housing supply and an increase in real estate prices, causing problems for low- and middle-income people who occupy a major part of the market, he said.

The longer inspection process had created problems for businesses, including higher bank loan interest, he added.

This will also create many challenges for home buyers in the form of increased selling prices and higher capital costs, according to Châu. Real estate businesses could face higher production costs and lose business opportunities, even bankruptcy, according to Châu.

The city’s budget revenue for land use has also significantly reduced. Last year the budget revenue fell by 23 per cent. In the first two months of this year, it fell by 76 per cent compared to the same period last year, according to HoREA.

The meeting, attended by the secretary and chairman of the city people’s committee, also proposed amendments to the Housing Law, Real Estate Business Law, Construction Law, Urban Planning Law and the Investment law, among others. — VNS

Previous: Hip-hop dance The Roots to be staged in Hà Nội
Next: Traditional tug of war handed down as heritage