Posted by: vivian on September 10, 2019 in Business Comments Off on Strong foreign buys rescue VN-Index from fall 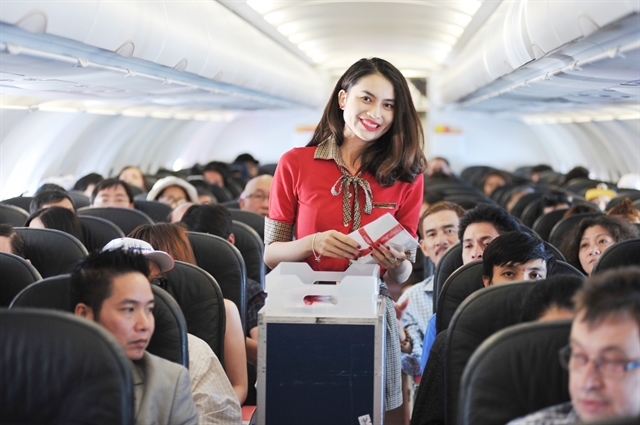 Shares of the budget airline (VJC) topped foreign buys with a net value of VNĐ356.4 billion on Monday. — Photo .com

HÀ NỘI — Strong buys by foreign investors helped rescue the VN-Index from a fall on Monday when the index below the reference threshold for most of the trading time.

Ending the session, the VN-Index closed unchanged at 974.12 points on the Stock Exchange. The southern market lost 1 last week.

The market breadth was negative with 196 shares declining, 111 rising and 61 closing flat.

Large caps dragged the market down, with half of the top 30 shares by market value and liquidity falling and only nine advanced.

They were net sellers for a fourth session on the Stock Exchange for a value of VNĐ8.8 billion but net buyers on the Unlisted Public Company Market for nearly VNĐ11 billion.

Other firms such as Sonadezi (SZC), Sonadezi Corp (SNZ) and Nam Tân Uyên Co (NTC) decreased between 5-6 each.

According to Bảo Việt Securities Co (BVSC), the market may move sideways with alternative ups and downs with a wide divergence among stock groups.

Previous: Exhibition on heritage preservation opens
Next: Following Neanderthals' footsteps to learn how they lived