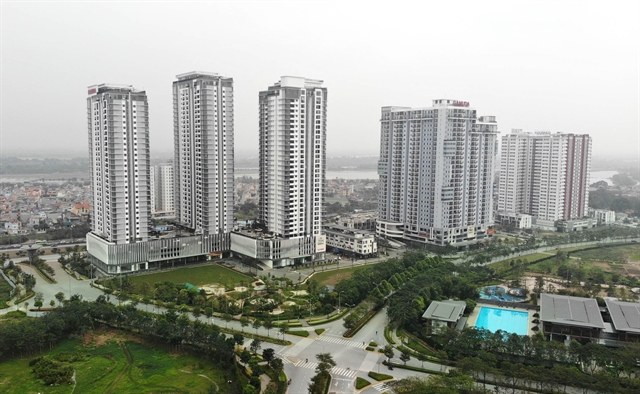 Buildings of Gamuda City, an urban project in Hà Nội. In the first four months of this year, real estate enterprises were the leading group in terms of bond issuance value with VNĐ28.85 trillion, accounting for 37.35 per cent of the total value of bonds issued in the period. VNA/VNS Photo

HÀ NỘI – The tightening of capital flows into the real estate sector has caused real estate businesses to halt the issuance of bonds in April.

This is according to data announced by the Việt Nam Bond Market Association (VBMA) in April.

VBMA said that by the end of April 29, the market had 23 private placement tranches of bonds with a value of VNĐ16.47 trillion (US$717.9 million) in the month.

The energy, transportation, manufacturing and financial groups also participated in private placement in the past month, but the volume only accounted for less than 10 per of the total issued value.

Since 2019, real estate businesses have been regularly in the group of businesses with the highest value of corporate bonds issued monthly, quarterly and annually. However, since the beginning of the year, after the tightening policy of capital inflows into this sector, the value of real estate corporate bonds has dropped sharply.

At the end of 2021 and the beginning of 2022, the Securities Commission has given sanctions in the field of corporate bonds against three enterprises, VsetGroup and Apec Group and VIS Securities Company.

At the beginning of April this year, the management agency announced the cancellation of nine bond issuances, totalling VNĐ10 trillion, of a group of companies under Tân Hoàng Minh Group. Not long after, the Ministry of Public Security also issued a decision to prosecute and detain Đỗ Anh Dũng, Chairman of Tân Hoàng Minh Group, and six related individuals for fraud and appropriation of property.

In January, real estate was still the group with the largest issuance value with VNĐ14.47 trillion, accounting for more than 55.8 per cent of the total issued value in the month.

In February, the issuance value of this group dropped sharply as no issuance was recorded. The figure reached VNĐ1.69 trillion in March. And in April, the market did not record any bond issuance.

However, according to VBMA, in the first four months of this year, real estate enterprises were still the leading group in terms of bond issuance value with VNĐ28.85 trillion, accounting for 37.35 per cent of the total value of bonds issued in the months.

It was followed by the banking group with VNĐ24.39 trillion, accounting for 31.57 per cent of the total issued value. VNS