Posted by: vivian on October 24, 2020 in Business Comments Off on Israel transfers irrigation technology to local university 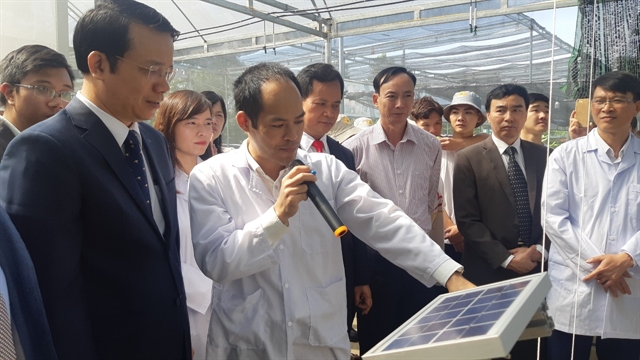 THÁI NGUYÊN — The Embassy of Isreal to Việt Nam has handed over an irrigation system to the Thái Nguyên University of Agriculture and Forestry.

The system will be used to train students, organisations and individuals who are studying and working in the agriculture sector in the northern province.

The university will also strive to become a high-tech agriculture training centre for the whole country.

The solar-powered irrigation system operates on dripping technology that helps water the plants over time and reduce the chance of water overuse.

The system is installed in a net house and run by a control panel that connects to a smartphone to adjust the light, humidity and ventilation.

The project is expected to boost the bilateral ties between Việt Nam and Israel in the agriculture sector, especially when the latter has abundant experience due to a lack of fresh water in its harsh geographical location.

The project costs the university more than US$20,000. Half of the expense is covered by the government of Israel via its Việt Nam-based embassy.

It is part of very meaningful and deep co-operation between the Israeli embassy and the university and the province, Israeli ambassador Nadav Eshcar said at the event.

“The dripping irrigation is a key Israeli technology which is relevant to the agriculture sector in Việt Nam,” he said.

The system here will serve not only exchange students, who have come to study in Israel, but also other students in Việt Nam, farmers and organisations in the surrounding area, the ambassador said.

“This is an opportunity for them to see how it works, to get the idea, to understand the technology, and to support the businesses and their future career.”

The Embassy of Israel to Việt Nam on the same day co-ordinated with the province of Thái Nguyên to organise a seminar discussing solutions for farming households.

Lượng hoped provincial farmers and agrico companies will have the chance to get access to Israeli technologies so that they are enabled to improve productivity and quality.

Speaking highly of the relations between Việt Nam and Israel in trade and education, the Israeli ambassador Nadav Eshcar hoped the ties between the two nations will grow in the future, especially in high-tech agriculture.

The Israeli government is willing to support the province to apply new technologies to help local farmers boost their production, the ambassador said. — VNS

Previous: Explore Ý Ty Mountainous Commune in Lào Cai Province
Next: The nostalgia of cốm the flavour of autumn