Posted by: vivian on February 27, 2021 in Business Comments Off on High-tech farming needs investment and proper policies 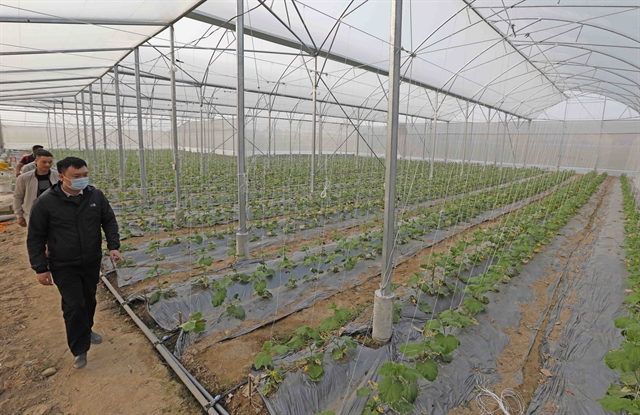 A high-tech greenhouse of a farmer in Chu Điện Commune, Lục Nam District, the northern province of Bắc Giang, who built it with preferential loans from the local goverment. — VNA/VNS Photo Trần Việt

HÀ NỘI — Việt Nam’s agriculture sector is aiming to be among the 15 most developed countries in the world, in which the agricultural processing sector ranks among the top 10 countries by 2030.

To realise the goal, the Government issued a resolution in 2019 on measures to encourage businesses to invest in effective, safe and sustainable agriculture as part of efforts to help the sector integrate globally.

The Ministry of Agriculture and Rural Development (MARD) recently submitted to the Government a project of export promotion of agro-fishery products by 2030.

To implement the target, the MARD will review and propose policies for investment attraction from private and foreign investors into the agro-fishery product processing industry.

For the last five years, there has been a wave of investment into agricultural production with 52,000 businesses, of which the firms directly participating in production hit 13,300, triple the figure of 2015.

The businesses’ participation not only contributed improve the value of agricultural products but also helped farmers access international standards.

However, according to experts, although investment in agriculture has flourished in recent years with the participation of many new tycoons, it has not become a strong wave.

Notably, the majority of agricultural enterprises are still small, of which 90 per cent are small and super small with capital of less than VNĐ10 billion (US$430,000) while the number of enterprises investing in high-tech agriculture is even more modest.

“Capital was also a big problem. To have the capital to buy agricultural land from farmers was a difficult problem,” said Tân.

“Access to capital from banks was not easy due to many procedures that agricultural enterprises struggled to meet,” he said.

“The accumulation of land to invest in setting up high-tech agricultural zones was also difficult so it required the help from local governments,” he added.

“It is necessary to increase the number of businesses taking part in the processing industry to become a kernel for 8.6 million farmers nationwide,” the director said.

“On the other hand, promoting science and technology to produce hi-tech agro-product is an inevitable trend,” she said.

There was a need for incentive policies such as simplifying loan procedures and completing criteria of high-tech agricultural enterprises to easily access bank loans.

Policies on land accumulation and granting land use right certificates, houses and properties attached with land ownership must be improved, according to Thắng.

According to experts, to attract investment in agriculture it was necessary to cut 40-50 per cent of current administrative procedures, improve the business environment and develop businesses substantially.

At the same time, reviews are needed to avoid overlaps in management and inspection and not let one product be subject to the management of too many units. Management methods should change to post-check from pre-check.

Besides, there must be clear planning of material zones connecting with businesses as well as support for the training of human resources for high-tech farming. — VNS