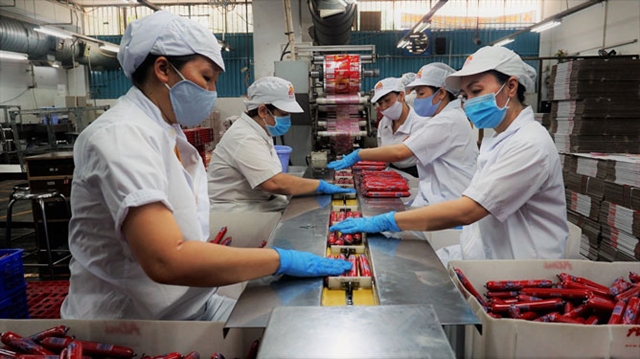 HCM CITY — A wide range of essential goods commonly consumed during the upcoming Tết (Lunar New Year) holiday have been adequately stockpiled and are now available for distribution at stabilised prices in HCM City.

The demand for essential goods is expected to increase by 10-20 per cent during the Tết holiday, said Phan Thị Thắng, deputy chairwoman of the municipal People’s Committee.

Businesses in the city have made huge efforts to increase production to meet rising demand during Tết, and have strictly followed preventive measures for COVID-19, Thắng said.

Pork and other fresh meat, eggs, fruits and vegetables, and processed food have been stockpiled to ensure supply to the market during Tết, Thắng said during a visit to two food manufacturing businesses in the city on Monday.

Stocked goods have surpassed 30-40 per cent over the targets set by local authorities, making it impossible for a shortage of goods and unexpected price hikes before and after Tết, she said.

Nguyễn Ngọc An, general director of Vissan JSC, said the company had stocked 5,183 tonnes of processed foods and 2,290 tonnes of fresh pork and beef, up 5 per cent and 10 per cent from a year earlier, respectively, to meet the rising demand ahead of Tết holiday.

The total value of stocked goods has jumped by 11 per cent from the same period last year to more than VNĐ900 billion (US$38.9 million).

Around 90 per cent of the production plan for Tết stocks has been fulfiled, he said.

The company is now focusing on adequate goods for distribution at stable prices as well as compliance with food safety and hygiene standards.

Vissan has ensured food supply to the northern provinces of Bắc Ninh and Hải Dương where thousands of people are under quarantine due to the COVID-19 outbreak, he said.

Nguyễn Thị Thu Trinh, deputy general director of the Sài Gòn Food JSC, said that around 2,700 tonnes of goods have been stockpiled to supply during Tết, an increase of 25 per cent compared to the same period last year.

The company has committed to ensuring stable prices during Tết, Trinh said. — VNS