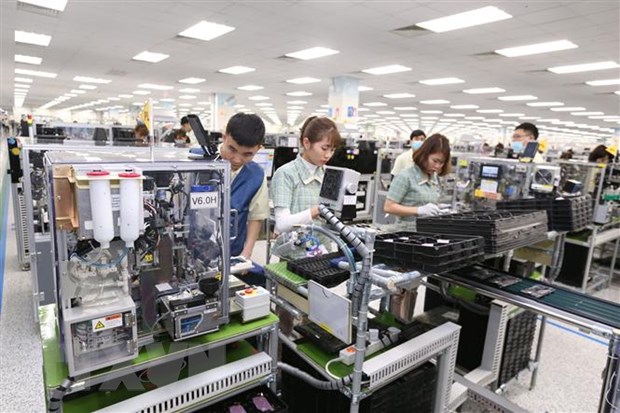 Workers at Samsung Electronics Việt Nam in the northern province of Thái Nguyên produce smartphones for export. Việt Nam’s exports rose by about 7 per cent in 2020. VNA/VNS Photo Anh Tuấn

A report released on Thursday by the rating agency says the positive outlook reflects Việt Nam’s growth and public finances’ resilience to the COVID-19 pandemic shock, and continued strengthening of external finances due to persistent current account surpluses and rising international reserves.

Việt Nam was among the few economies in the Asia Pacific region and the ‘BB’ rating category to maintain positive growth in 2020, at 2.9 per cent. The relative strength of Việt Nam’s performance was largely due to its success in bringing the coronavirus outbreak swiftly under control, despite the pandemic’s impact on domestic economic activity and tourism inflows, alongside strong policy support and export demand.

“The rollout of Việt Nam’s vaccination programme is off to a slow start, but we nevertheless expect GDP growth of about 7 per cent in 2021 and 2022, in line with a broader global economic recovery sustaining export growth and a gradual normalisation of domestic economic activity based on our expectation of continued success by the authorities in containing domestic coronavirus infections,” Fitch said.

Việt Nam’s external finances have strengthened further despite the pandemic. Exports rose by about 7 per cent in 2020 in US dollar terms, and the current account recorded a surplus of about 3.6 per cent of GDP. Strong export performance reflects a surge in demand for high-tech components associated with strong sales of IT equipment in the US and other advanced economies as well as continued benefits of trade diversion, associated with rising costs in China and the US-China trade war.

Fitch forecast Việt Nam’s current account to remain in surplus at 1.2 per cent and 2 per cent of GDP in 2021 and 2022, respectively, compared with an average deficit of 1.7 per cent for the ‘BB’ median.

Foreign-exchange reserves rose to US$95.2 billion by end-2020 likely due to a combination of factors, including a current-account surplus and foreign currency purchased by the State Bank of Việt Nam (SBV).

“We project foreign-exchange reserves will continue to cover around 3.5 months of current external payments in 2021 and 2022, compared with a forecast ‘BB’ median of 5.2 and 4.7 months, respectively. Nevertheless, Việt Nam’s external liquidity ratio, measured by the ratio of the country’s liquid external assets to its liquid external liabilities, also improved further to 388 per cent in 2021, more than double the forecast of the ‘BB’ median.”

The bulk of the strong FDI inflows in 2020 went into the manufacturing sector. Net FDI in 2020 was $15.4 billion (about 4 per cent of GDP), close to the previous year’s level. Fitch expected FDI inflows to stay healthy as Việt Nam is likely to benefit from the ongoing trade diversion and also its entry into trade agreements such as the EU-Việt Nam Free Trade Agreement and the Regional Comprehensive Economic Partnership.

According to Fitch, Việt Nam’s economic prospects will remain susceptible to shifts in external demand due to the economy’s high degree of openness. Việt Nam was designated as a currency manipulator by the US Treasury in a report late last year, which complicates its economic relationship with the US.

“Nevertheless, we expect the two countries to engage in discussions in the coming months to reduce tensions, and in the near term, we do not expect this development to have a significant impact on Việt Nam’s external finances,” Fitch noted.

The pandemic had a smaller impact on Việt Nam’s public finances than ‘BB’ peers. Fitch estimated the general government deficit widened modestly in 2020 to 3.5 per cent of GDP (7.2 per cent for the BB median), as spending was targeted mainly at alleviating the impact of the pandemic.

The Ministry of Finance (MoF) said the credit rating agency’s upgrade of Việt Nam’s outlook  reflected the growth resilience of the country, which was among the few economies in the Asia Pacific region and the “BB” rating category to maintain positive growth in 2020, at 2.91 per cent.

Apart from Moody’s Investors Service recently raising the outlook for Việt Nam to “positive” from “negative” – an unprecedented move in its ranking globally since the start of the COVID-19 pandemic, Fitch Ratings’ upgrade of Việt Nam’s outlook demonstrates credit rating organisations’ belief in the Government’s effective policies, strong growth prospects, and increasingly solid fiscal space, according to the MoF. — VNS