Posted by: vivian on September 23, 2020 in Business Comments Off on Air transport ground service firms stand out amid pandemic 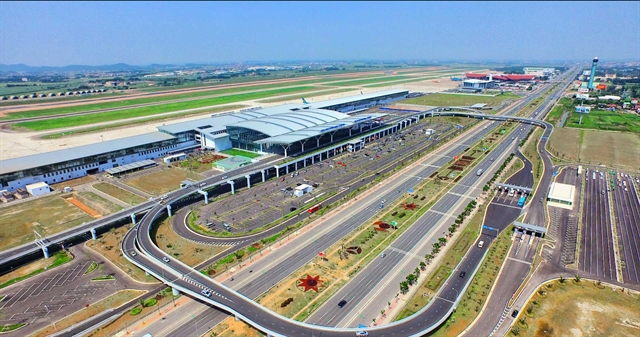 HÀ NỘI — Since the first coronavirus cases were detected in Việt Nam in March, the outlook for air transport-related stocks has remained negative.

After Việt Nam faced the second wave of coronavirus in mid-July, some investors expressed concerns that air transport may never return to its pre-pandemic days.

In the air transport sector, airlines firms have seen their revenues decline sharply as the number of passengers falls due to travel restrictions across the world.

Shares in Vietnam Airlines (HVN) dropped to a one-year low of VNĐ17,800 (US$0.76) on March 31, then bounced back thanks to strong domestic purchasing power, not because of improvements to its business performance.

Shares in Vietjet (VJC) have been even more volatile, falling to VNĐ95,000 apiece in late March and late July following reports of new coronavirus cases.

Though the two airlines have taken measures to cut costs and asked lenders to extend loan and curb interest rates, the situation seems bleak for them given the fact the virus has not been contained around the globe.

The company is authorised to run 22 airports in Việt Nam, including nine international airports and 13 domestic ones. Those include key airports in major cities and provinces such as Hà Nội, HCM City, Đà Nẵng and Khánh Hòa. In the future, it is unlikely that a new rival will rise to compete with the company.

The monopoly given to ACV allows the company to control talks with service providers if they want to set up sales booths in its airports and prices are almost non-negotiable.

In the second quarter of 2020, ACV reported a net loss of VNĐ354 billion ($15.2 million) as the company had to lower its rental fees for airport retailers, while it recorded a profit of VNĐ1.9 trillion in the first quarter.

But cash and cash-equivalent assets were worth VNĐ19 trillion on June 30 and this should be a great advantage for the firm, according to VietCapital Securities Corporation.

ACV shares (ACV) also dropped to VNĐ54,400 apiece on March 31 when Việt Nam was hit with the first coronavirus wave. The company’s stock rose 26.3 per cent to VNĐ68,700 on June 8 and is on its way to hitting that level again.

ACV shares were flat at VNĐ62,200 apiece on Tuesday.

Ground company Sai Gon Cargo Services JSC (SCSC) has seen the volume of goods being transported through Tân Sơn Nhat International Airport decline in the last six months, but analysts have said this situation would not last long.

They said that travel restrictions had been applied for passengers only, and the cargo transport sector would not suffer too much. Instead of taking people from one location to another, aviation firms have increased their cargo shipments to offset the impacts of the pandemic on their businesses.

Recently, Vietnam Airlines and Vietjet re-opened some domestic and international routes and their policies are expected to help boost the performance of ground service companies, including the two firms mentioned above.

NCTS shares (NCT) also went in the direction in late March, falling to VNĐ40,170, but have soared 45.5 per cent in the last six months.