Posted by: vivian on July 3, 2020 in Business Comments Off on 5G creates innovation opportunities for all economic sectors in Việt Nam 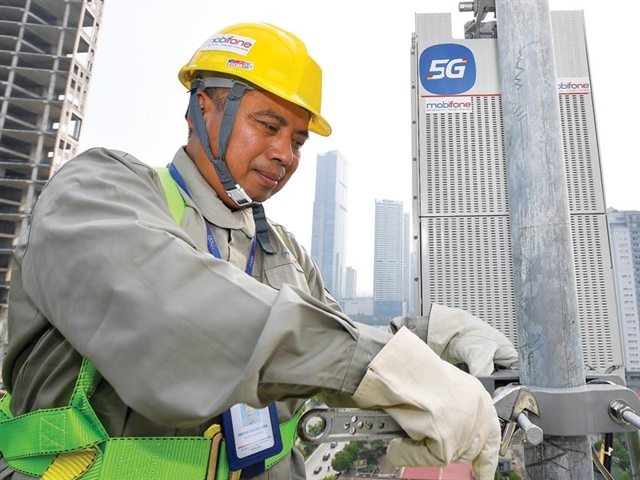 Mobifone tests the 5G network in April. Việt Nam has developed a 5G network for the country’s innovation. — Photo courtesy of Mobifone

HÀ NỘI — The development of 5G in Việt Nam will be the foundation for innovation for all economic sectors in the country, said Nguyễn Phong Nhã, deputy general director of the Authority of Telecommunications under the Ministry of Information and Communications.

Nhã spoke at an online seminar on the development of the technology, saying that 5G networks with higher speed, wider bandwidth and lower latency will serve all economic sectors.

The seminar, held by Qualcomm on July 1, discussed the potential of the network in Việt Nam, which is one of the first countries to commercialise 5G after successful tests in 2019.

Nhã’s department recorded a 40 per cent increase in data usage. In this case, he added the faster 5G network can deploy larger-scale IoT platforms, enabling tens of billions of IoT devices to connect within the 5G network.

The deputy director said because of the low latency, 5G will provide new services that 4G cannot yet implement, such as smart health, self-driving cars, smart cities, or live high-resolution video that serves all industries in Việt Nam.

With higher speeds, storage capacity will no longer be dependent on the terminal, instead big data can be saved and retrieved from the cloud.

Nhã said: “Once the network operator has built a strong 5G network, both big enterprises and start-ups will have more business opportunities.”

Nhã linked the development of the network with the national programme encouraging “Make in Vietnam”, in which local technology firms will turn the country into an economic engine and escape the middle-income trap, making it a developed country.

As Việt Nam was reforming policies to attract investment and deploying sandboxes to test new business models, he said: “It will transform telecommunications infrastructure to meet the demand for businesses to deploy services such as artificial intelligence and big data.”

Nhã suggested Qualcomm work closely with local businesses in providing chips and copyright to produce 5G-based products in the country.

He said: “After producing 5G devices and running them well on 5G platforms in the country, Viet Nam also has the chance to export the devices worldwide.”

Thiều Phương Nam, Qualcomm country manager for Việt Nam, Laos, and Cambodia, also saw the demand for data has risen over the years, adding that: “The COVID-19 pandemic has put further pressure on current networks.”

Qualcomm’s representative said Việt Nam can build its 5G on the existing 4G platform, so it will save costs and take advantage of both 4G and 5G.

Qualcomm said 5G development was aligned with the Vietnamese Government’s digitalisation plans and its objective of making full use of opportunities brought about by Industry 4.0, as summed up in Resolution No. 52-NQ/TW dated 27 September 2019.

In the National Strategy for the Fourth Industrial Revolution, the government outlined specific socio-economic targets through 2030, including the digital economy accounting for 30 per cent of GDP, completing the formulation of e-government; and forming smart urban chains in key economic regions.

Nam said: “5G will be the underlying technology that will help power Viet Nam to reach these objectives.”

Nam said with the commitment to the growth of the wireless industry in Viet Nam, Qualcomm has invested significantly in supporting ecosystem partners and fostering innovation through the programme Qualcomm Vietnam Innovation Challenge.

While Qualcomm reported about 30 countries with commercialised 5G and 375 smartphone devices, CPE, and 5G modules have been produced to use in the network, the latest Global Industry Vision (GIV) report of 5G developer Huawei projects a per-person average possession of five smart devices by 2025.

Huawei’s report said apart from eight billion smartphones, there will be more than 20 billion PCs, tablets, VR headsets, smartwatches, and smart screens among other smart devices. As a result of 5G connections, these physical devices for homes or offices can be systematically integrated with the digital world to build new smart infrastructure platforms for consumption, education, travel, and work. This, in turn, will create new types of smart services, said the report.— VNS