Posted by: vivian on July 21, 2021 in Arts & Entertainment Comments Off on The taste of turmeric: Thái Bình's bánh nghệ

Thái Bình Province is well known for its bánh nghệ (turmeric cake), a traditional rice-based cake that has existed for hundreds of years.

“It’s different from other cakes… people can eat a lot and they don’t need to be afraid to eat too much,” she says.

Tiền Hải District’s, Nam Trung Village is considered the birthplace of bánh nghệ. Many local villagers make a living preparing and selling these cakes to people of all ages.

“This rural popular cake is enjoyed by not only adults but also children because of its soft, fragrant rice and turmeric. It is also very nutritious,” she said. 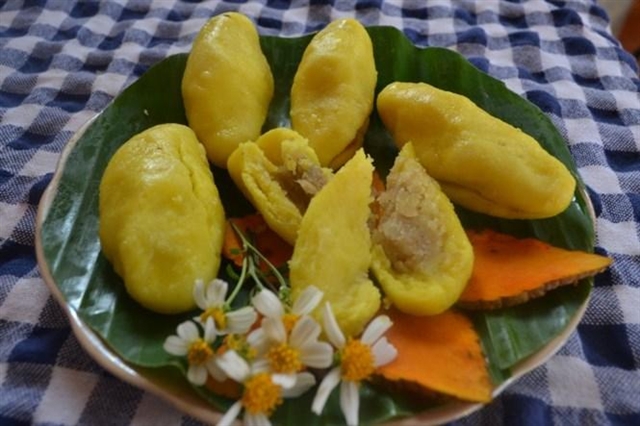 Bánh nghệ (turmeric cake), a popular traditional cake that has been eaten for hundreds of years in Thái Bình Province. Photo toplist.vn

Đào says that to make the tastiest cakes the right ingredients are very important. Thái Bình rice must be used and makes a dough that is not too wet and not too dried.

Many bakers have taken to using dried turmeric powder, however, Đào says the cake is more delicious and fragrant when the turmeric is fresh. She uses turmeric and onion straight from her garden.

Dumplings are put in the middle of turmeric dough. They are balled before being steamed. Photo nghienbep.com

To make the cake the rice is soaked in water for 4-5 hours and then ground into a half wet and half dry dough. Turmeric is ground down and its essence is filtered into a turmeric juice. The turmeric is added to the dough and the mix is steamed.

For the filling Đào adds diced onions, minced pork scraps, a touch of cinnamon powder and fish sauce and fries it up in a skillet.

Then it’s a matter of bringing the dough and the filling together.

Đào says the dough should be divided into small balls about the size of a chicken egg. The filling is pushed into the centre of the ball. They are then steamed on the fresh banana leaves for 30 minutes.

“The cake is tastier when enjoyed hot,” she says.

“We have to wake up very early in the morning to make the cake so that we can bring it to the market at 5am,” Đào says.

But Đào says she enjoys it.

“I’m glad and happy because my customers are increasing and I have many repeat customers who enjoy my cakes.”

“During special occasions like Tết, I often receive a lot of orders from diners in Hải Phòng, HCM City and other southern provinces. Sometimes my relatives in the US also ask me to send them cakes too,” she says. 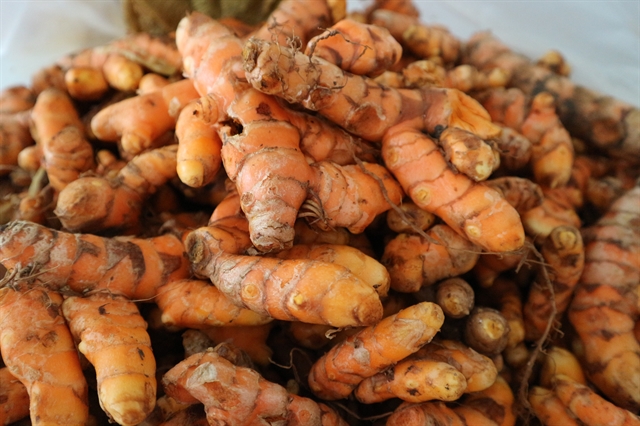 Fresh turmeric is one of the main ingredients in the cake. Photo cnthucpham.donga.edu.vn

Nguyễn Văn Biểu, who was born in Thái Bình’s Nam Trung Village, now works in Hà Nội, and says that he often takes his children back to the village’s Quán Market to enjoy bánh nghệ.

“It is a very good chance for me to share the story of the cake that is so closely connected to my childhood and now to my children,” he says.

“I told them that I was very happy [as a child] because every morning before going to school my mother would often give me one or two bánh nghệ. For me, it was an excellent breakfast that I can never forget,” Biểu says.

He said bánh nghệ is very good for the digestive system and physical development because the cake does not have any preservatives or colouring products. 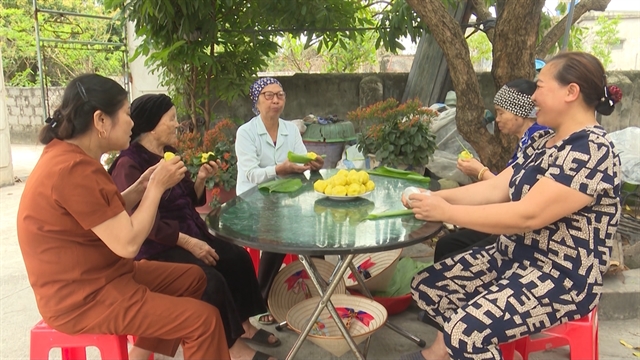 Locals are happy to enjoy the cakes. Photo thaibinhtv.vn

Travellers to the province that want to try the tastiest and nutritious turmeric cake should visit local markets in Nam Trung and Nam Thanh villages, Thể advises. VNS