Students speak up for gender equality

Posted by: vivian on July 22, 2020 in Arts & Entertainment Comments Off on Students speak up for gender equality 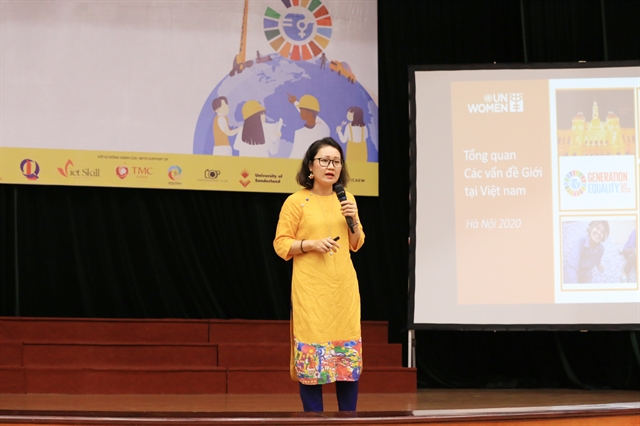 HÀ NỘI — Nguyễn Hoàng Minh Thư, a 10th grade student from the southern city of Cần Thơ, won a competition entitled ‘Generation Equality: The Future I Want’ with the message: “We don’t speak for women or men’s rights, we speak for human rights”.

“Now I just contribute a small voice, but I believe that I will inspire others and spread my message, then there will be other voices to speak up for gender equality,” the winner of the English category said.

Trần Tuấn Anh from the Academy of Journalism and Communications won in the Vietnamese category.

The competition wrapped up on July 20 after two months. The event was co-organised by the International School of Business of Banking Academy and UN Women with the aim to listen to and spread stories told by Vietnamese people calling for gender equality.

The competition attracted 500 students throughout the country to participate in Public Speaking and Debate in Vietnamese and English categories.

Singer Trọng Hiếu took part as the guest artist of the competition. He sent a message that “we live under the same sky, so speak up and choose your future.”

“If you as the human beings have got the rights and the freedom to decide and to do whatever you want in your life and get rewarded for the work that you deserve without any difference whether you are man or woman,” he said.

“They are encouraged to eliminate the prejudice to restrict the development of all genders. Gender equality is not a problem of one generation, it’s our concern, our future.” — VNS