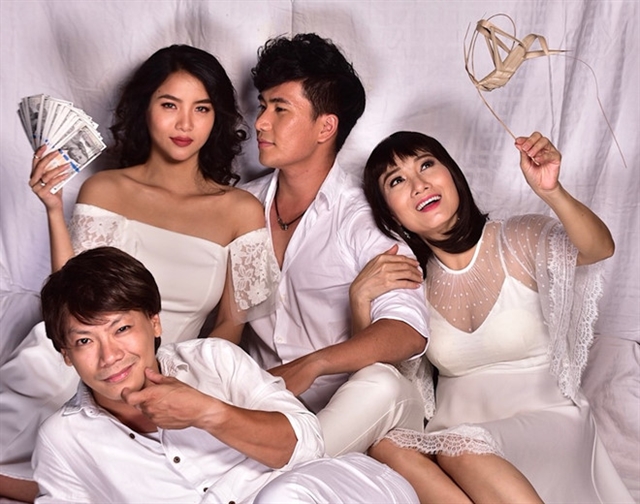 HCM CITY — Young actors from the Small Theatre of HCM City are preparing for this summer with a series of new plays.

The artists will stage Tiền Là Số Một (The Power of Money), a tragi-comedy written by Hoàng Mẫn, a famed playwright of theatre in Sài Gòn style.

Directed by Quốc Thịnh and Công Danh, the play is about the life and loves of Tửng and Phèn, poor farmers who became millionaires after winning the lottery.

Tửng and Phèn can enjoy happiness and love with money but it controls their lives. They have no true love, friendships or family.

“Our work features a very old story, but also is about the social issues of today,” said the play’s director Thịnh.

The play includes dance and music to express the actors’ emotions and feelings. Lighting and sound effects will also be used.

“For me, all experimental plays are a big challenge. I’m very involved in the job because I don’t want to disappoint my staff and audiences,” he added.

Thịnh also worked with costume designers on making clothes for the main characters.

“I wanted to use young actors because they make the play fresh. I also wanted to offer opportunities for young people who need to challenge themselves in the art,” said Thịnh, who plays a small role in the play.

“We have improved our shows in the hopes that our troupe will be recognised as a professional theatre. I hope my young staff can learn new things and develop techniques and ways of emotional expression,” said Thịnh.

Tiền Là Số Một  will debut on Thursday at the Small Theatre at 5B Võ Văn Tần Street in District 1. It will be staged every Saturday and Sunday from June to August. — VNS

Previous: EVN supports for one price at 9.35 US cents for rooftop solar power
Next: VN vows to facilitate bilateral ties with Mozambique