Posted by: vivian on October 23, 2020 in Arts & Entertainment Comments Off on Seoul hosts international photojournalism exhibition on COVID-19

SEOUL The Seoul Metropolitan Government is hosting an event titled “2020 Seoul International Photojournalism Exhibition: 2020 Seoul of New Hope” both offline and online till December 20 to exhibit photos taken by global photojournalists who capture moments of “chaos, desperation, courage and hope” at the very front line of the COVID-19 pandemic around the world.

As many as 120 photos that covered COVID-19 by 70 international photographers from global news outlets including AFP, AP, REUTERS, EPA, EFE, The New York Times, Xinhua News Agency, Getty Images, and Rex Features (Shutterstock) are on display. 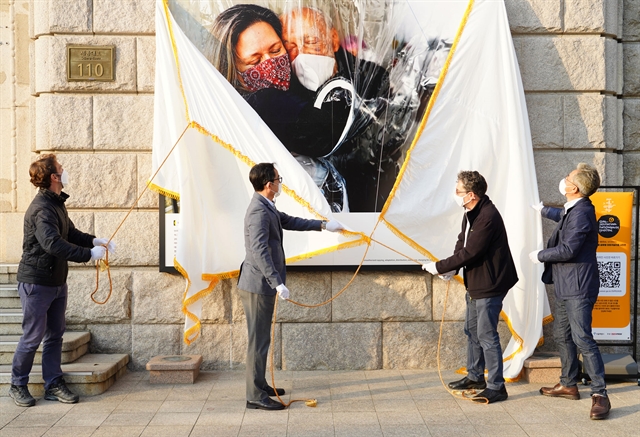 Hosted by the Seoul Metropolitan Government and organised by news photo agency PENTA PRESS, the exhibition aims to deliver a message of hope amid the unprecedented pandemic.

The exhibition comprises the Main Exhibition and the Special Exhibition. For the Main Exhibition, a total of 70 photos featuring the global pandemic are displayed with storytelling themes of “Chaos, Desperation, Courage, and Hope.” They present the world’s scenes of chaos and pain brought by the coronavirus and people’s courageous struggle against the virus to overcome the crisis.

Along with the Main Exhibition, the Special Exhibition is organised with photographs that show how people in six cities from five continents – Seoul, New York City, London, Tokyo, Rio de Janeiro and Johannesburg – are suffering from and fighting against COVID-19.

The New York Times’ Chang W. Lee shared his personal experience of being infected with COVID-19 in a video interview and said: “Through the exhibition, I hope many people will join the efforts and sacrifices medical workers have been making to overcome the coronavirus.”

Lee is a Korean American staff photographer for The New York Times and was a member of the staff that won two 2002 Pulitzer Prizes: one for Breaking News Photography for coverage of the September 11 terrorist attack on New York City and its aftermath; the other for Feature Photography for photographs chronicling the pain and perseverance of people enduring protracted conflict in Afghanistan and Pakistan.

The video interviews of six photojournalists can be seen via the exhibition’s official website and YouTube channel.

In a bid to prevent the spread of COVID-19, Seoul minimises the number of photos displayed at the on-site exhibition. Instead, Seoul offers the Digital Gallery and 360° Virtual Gallery at the website so that anyone can enjoy the exhibition without visiting the venue.

The 360° Virtual Gallery is created with the backgrounds of the Seoul Metropolitan Library, Cheonggyecheon Stream, and Deoksugung Stonewall Walkway, the three significant landmarks of Seoul so as to enjoy the online exhibition, allowing people easy access and a realistic experience. The Digital Gallery will also be an option to enjoy the exhibition to see photos with detailed explanations.

For the offline exhibition that will take place for 12 days from October 20 to 31, some photos are displayed on the outer wall of the Seoul Metropolitan Library and the Sangam Digital Media Street (DMS).

Twenty-five photos are installed on the Seoul Metropolitan Library so that visitors can enjoy the photos by walking along the building. For the Sangam Digital Media Street located between Sangam MBC and Seoul Business Agency buildings, 20 photos are displayed in two-metre-tall frames and the digital electronic board.

Ph.D. James Kelly, Chief of the photo selection committee, said: “The photos at this photo exhibition remind us of the basic fact that we are all human beings and equally vulnerable to the virus. Through the story of this exhibit, we might understand what is happening to society—not just our own, but every society in every part of the world. My hope is that these photographs have changed our perception of the virus and the illness that it brings.”

Park Jin-young, Director-General of Public Communication, said: “I hope that this exhibition will provide a chance for the world’s citizens as well as Seoul citizens to relieve anxiety and stress somewhat and share a hope that we all can overcome the difficult times. The exhibition is expected to serve as an opportunity for people around the world to expand their consensus at a time when the movement between countries has been limited and contracted by the coronavirus.”

He added: “I hope 120 photos of the exhibition will become a message of courage and hope to overcome the pandemic.” VNS