Posted by: vivian on March 2, 2021 in Arts & Entertainment Comments Off on Roast pork belly, a must-try dish from Đường Lâm ancient village

Hà Nội is home to many famous specialities but few are as mouthwatering as thịt quay đòn (roast port belly) in the ancient village of Đường Lâm, about 44km from the city centre.

It is said that King Ngô Quyền (939-944), whose native village is in Đường Lâm, after defeating the Southern Han invaders from China ordered chefs to make roast pork belly to give a feast to his troops.

The dish was so tasty and delicious that troops said they couldn’t get enough, according to legend. 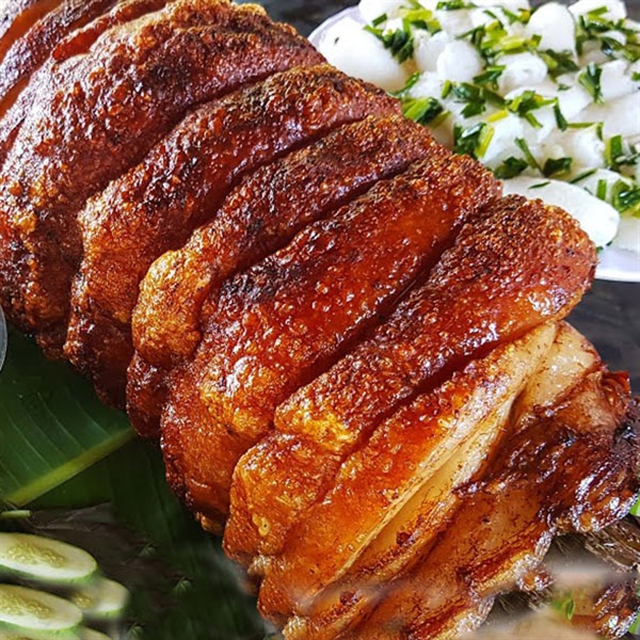 The dish has been the village’s claim to fame since then, said Nguyễn Đăng Thạo, head of Đường Lâm Ancient Village’s management board.

Nguyễn Thị Hương, a famous roaster in the village, said she has to order fresh pork belly from prestigious butchers. “It is to ensure that the roasted pork is crispy but fragrant.”

The pork belly should be carefully soaked with hung lìu (flavouring powder with five ingredients including cinnamon, anise and sweet basil), pepper, fresh onion, fish sauce and salt, said Hương, adding that the most important ingredient is the guava leaves. 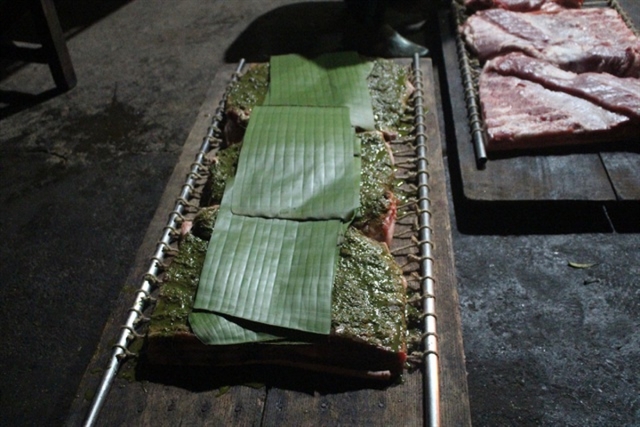 Kicker: The fresh pork belly soaked with many ingredients including guava leaves help to make the dish much more enjoyable. Photo vov2.vov.vn

She said the guava leaves should be grown naturally without being sprayed with pesticides to ensure the roast pork has a natural fragrance.

The raw meat should be soaked for at least two hours before roasting.

“Apart from guava leaves, we have to use a bamboo tube which is about two metres long to roast the meat. It needs between five and six hours to roast it over charcoal,” said Hương, noting that while roasting, the chef has to use a bamboo spit to make holes on the pork skin until it becomes brown and crispy. 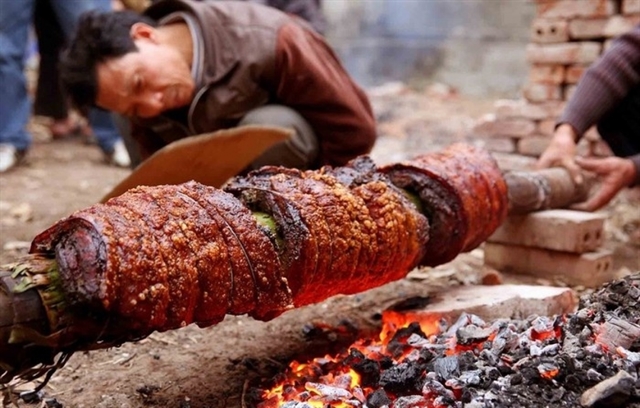 Kicker: A cook is roasting the pork belly on charcoal. Photo vov2.vov.vn

The dish is more delicious when dipped in fermented soybean locally made in Đường Lâm or lime with salt, said Hương, adding that apart from locals and visitors to the village, many customers in Hà Nội and provinces such as Hải Dương, Hải Phòng and Quảng Ninh have ordered her dish.

The dish is a must-have for big parties such as Tết (Lunar New Year) or wedding parties.

“I sold several hundred kilogrammes of such dish a day at the recent Tết holiday,” Hương said, adding that she and her husband are teaching their descendants about the trade.

“The technique of making pork belly roast is rather difficult, it requires a cook to have the mind to invest his/her self in the job,” she said. 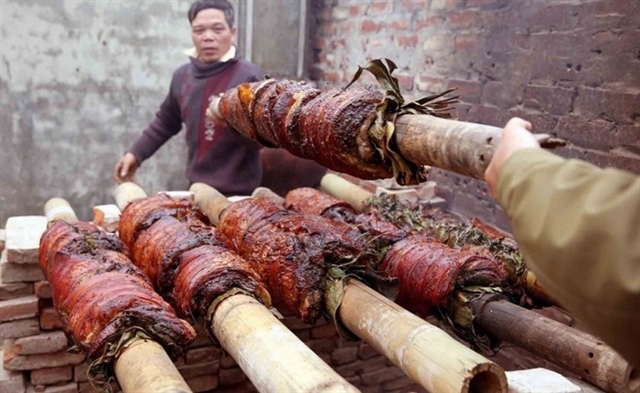 “I will never forget the roast pork belly for its savoury, soft, crispy taste and particularly the special fragrance of guava leaves.

“This year, I plan to learn the roasting technique to apply it to my restaurant chains across the country to serve locals and foreign guests,” said Hải. VNS