Posted by: vivian on July 23, 2021 in Arts & Entertainment Comments Off on Quảng Bình to launch General Võ Nguyên Giáp contest 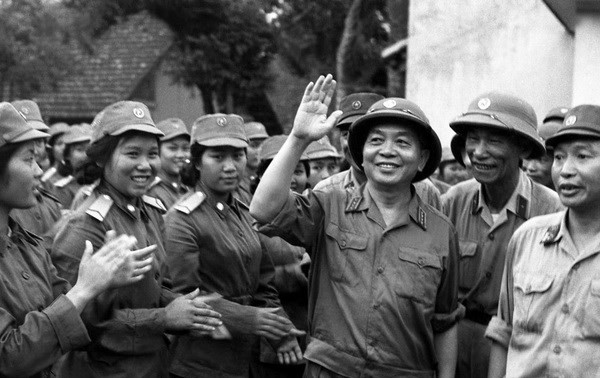 General Võ Nguyên Giáp visited the female members of the army signal and medical units who participated in a military parade on May 1, 1973. VNA/VNS Photo Vũ Tạo

HÀ NỘI — In honour of the 110th anniversary of General Võ Nguyên Giáp birthday (August 25, 1911), a contest on the late general will be held at the end of July.

The contest is being organised by the Central Youth Union in collaboration with the General Department of Politics of the Việt Nam People’s Army and Quảng Bình province.

The theme of the contest is “Võ Nguyên Giáp — People’s General” and it aims to promote and educate young people about General Giáp’s contribution to the country’s revolution and resistance wars.

The contest will show the pride and deep gratitude the Vietnamese feel for the General — a Communist fighter who dedicated his life to the nation. It is hoped this will encourage people to study more about Gen Giáp and other revolutionary leaders.

The contest will consist of two parts: the online interactive multiple-choice and writing. Vietnamese citizens, both at home and abroad, are eligible to enter.

The online interactive multiple-choice contest will be live-streamed on Facebook from July 30 to August 25. This will be on the fan pages: Web Portal of the Central Commitee of the Hồ Chí Minh Communist Youth Union and the Publicity Department of the Youth Union.

The writing portion of the contest will focus on the contestant’s personal feelings about the general’s life, career, and his contribution to the revolution as well as personal memories of the man himself.

Contestants will also discuss how young people can follow the example of the General to contribute to building a prosperous and strong country.

The writing portion will need to be submitted to the Hà Nội Youth Union through the Youth Union Publicity Department from September 10 to November 16.

The award ceremony will be held on December 22 (the 77th Anniversary of the Founding of the Việt Nam People’s Army).

Prizes for the writing portion are from VNĐ5 million (US$216) to VNĐ15 million.

For the online interactive multiple-choice contest, the prize for each winning answer is VNĐ300,000, and the prize for the winner of each contest is VNĐ3 million. VNS

Previous: Off the beaten-track in Hầu Thào Commune near Sa pa
Next: Việt Nam at risk of losing pepper export markets due to high freight costs