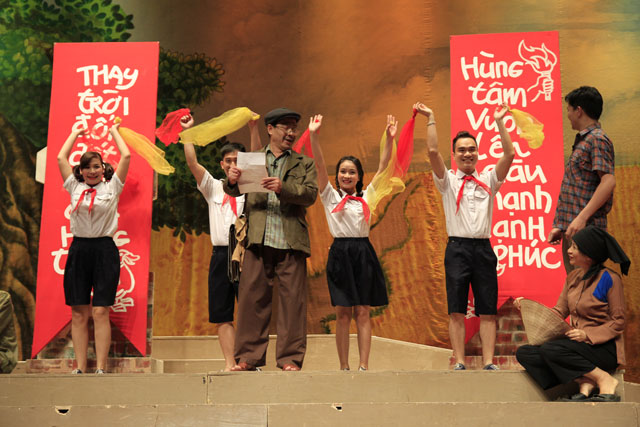 A scene from Bệnh Sĩ (Egotism), one of Lưu Quang Vũ’s most famous plays. Photo courtesy of the  Việt Nam Drama Theatre

HÀ NỘI – Bệnh Sĩ (Egotism) by late playwright Lưu Quang Vũ will be staged on Saturday evening at the Hà Nội Opera House, marking the return of cultural activities after the pandemic.

Bình told Việt Nam News on Friday that leaders and officials from the ministry had bought tickets (VNĐ500,000 each) for the play to encourage the artists who are eager to return to the stage.

“In response to Minister Nguyễn Ngọc Thiện’s call to bring cultural events back to life, we will be attending the play and encouraging people to buy tickets to support the artists,” he said.

“After the play, audiences will enjoy various performances hosted by 12 theatres managed by the ministry,” Bình said.

The play has received great acclaim from audiences since its premiere in 2016. It has been performed throughout the country and many European countries such as the Czech Republic, Germany, Poland, Austria, Hungary, Russia and Ukraine.

Set in a rural village in the north, the play is about a commune chairman and his officials, who are ordinary and good-natured people. However, they begin to consider themselves ‘noble’ and go in hunt of glory. Many ridiculous scenarios arise as the officials battle their good nature and try to adapt to their new roles.

Vũ has written more than 50 plays. Most of them reveal and criticise the darker side of society, especially focusing on corruption and authoritarian behaviour among local officials.

The next performances financially supported by the ministry include circus, water puppetry, cải lương (reformed theatre), ballet and singing/dancing shows. The circus performance Pirates will take place at the Việt Nam Circus Federation, 67-69 Trần Nhân Tông Street on May 31. Artists from the Việt Nam National Opera and Ballet Theatre will also perform Swan Lake on August 22 at the Hà Nội Opera House. VNS