Posted by: vivian on December 5, 2019 in Arts & Entertainment Comments Off on Korean and Vietnamese artists display works together

The 12 exhibitors are made up of both established and emerging artists, selected by the exhibition’s curators Chung Joon-Mo and Trịnh Tuân.

“The exhibition organisers want to give the public a view of the approach, features and differences in the monochrome-style works of Vietnamese and Korean artists,” said Tuân.

“Monochrome style is a strength of Korean painting. This is proved by many exhibitions with the participation of many famous artists held in Korea.”

Their paintings are not monochrome only but made in a minimalist style with one colour or two colours.

He painted them using his hands and not a brush.

“Participating in the exhibition gave me a chance to introduce about modern fine arts of Korean artists,” said Kim. “In the past, Korean fine arts were impacted by western fine arts. It makes me to think about Korean typical characteristics.”

“The exhibition enables me to view paintings by Vietnamese colleagues. Though, I see the similarities and differences between the two countries.”

Kim studied in Korea and received his MA in the US. He is currently a professor of Fine Arts at Seoul National University.

Since 1990, Kim has been painting exclusively in blue. He purposely exposes small areas of the white background, creating a dialogue between the surface and the artistic process. 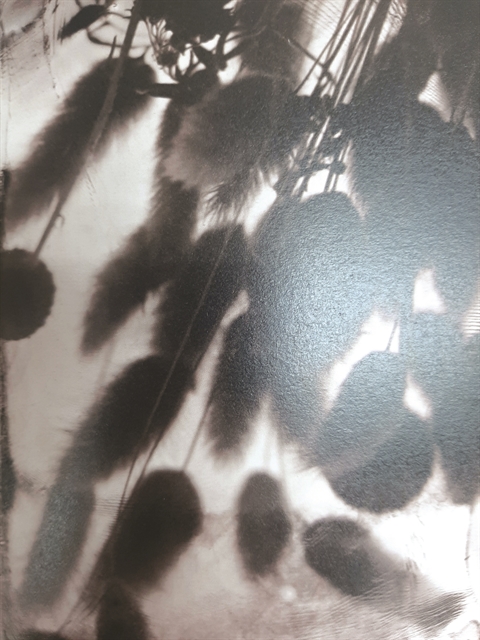 Lee used analog printing to create the works from photo layers.  The cloud and flower photos were taken by her.

“Colour is not the most important element. Korean artists tend to choose light colours because they want to avoid the colour becoming the centre of the whole work.”

Trịnh Minh Tiến is the youngest among Vietnamese artists at the age of 36. His paintings at the exhibition include paint-on metal Cathedral in The Rain and Old Monastery and acrylic Inside.

Inside was made this year, inspired by the 1,000-hand Bodhisattva Kwan Yin statue.

“It’s great to show paintings with many other veteran artists of Korea and Việt Nam,” Tiến said. “I’m proud to represent Vietnamese artists at this exhibition.”

Tiến won awards the second prize at the Young Eye contest held by Việt Nam Fine Arts Association in 2005 and French embassy and the excellent artist at a Work Room Four event in 2003.

The exhibition is held by Korean Cultural Centre with support from the Korea Culture and Information Service, Korean Ministry of Culture, Sports and Tourism and Korean embassy to Việt Nam.