Breaking News
You are here: Home » Arts & Entertainment » From Russia with love for Vietnamese folk songs

From Russia with love for Vietnamese folk songs

Posted by: vivian on July 23, 2020 in Arts & Entertainment Comments Off on From Russia with love for Vietnamese folk songs

Hearing them sing the Vietnamese folk song Bèo Dạt Mây Trôi (Floating Water Ferns and Wandering Clouds) would leave any listener holding their breath as it is so sweet.

That’s why their performances by Hoàn Kiếm Lake in downtown Hà Nội, in a pedestrian zone in HCM City or on a boat in Tràng An Tourism Complex in the northern province of Ninh Bình are so popular.

Two Russian sisters from Saint Petersburg have won the hearts of locals with their gentle voice and melodious violin while clothed in Vietnamese traditional long dress, áo dài. The two sisters in traditional áo dài perform on Nguyễn Huệ Walking Street in HCM City during Tết Holiday in 2018. Photo Courtesy of the band

Sonya Firsova, 27 and Viola Firsova, 22, were born into a musical family. Both their father and older brother are travelling artists while their grandparents played the piano very well. They all started to play instruments at six years old. Sonya played the mandolin while Viola played, of course, the violin.

When Sonya finished her five-year vocalist studies vocalist in 2014 in the UK and her smaller sister completed high school in Russia, the two sisters started their first music project in Hong Kong. After three years in Hong Kong, they travelled to China, Macau, Malaysia, Việt Nam, South Korea and India between 2017 and 2019.

In February last year, they returned to Việt Nam and have stayed here ever since.

Sonya said they started performing together as the band Sisters First in 2009 when Sonya was 17 years old and her younger sister 12.

“In Việt Nam we work as singers, composers, models, and actresses,” said Sonya. “We have performed in events and festivals in various places.”

“Especially we have felt the safety and friendliness in the way people welcomed us,” Sonya added.

In the past more than a year, with the assistance of a Vietnamese friend, the two sisters have become fairly fluent in Vietnamese. They now can sing 12 Vietnamese songs including folk songs like Người Ơi Người Ở Đừng Về (Please Stay, Don’t Go), Cây Trúc Xinh (Beautiful Bamboo) and Bèo Dạt Mây Trôi. 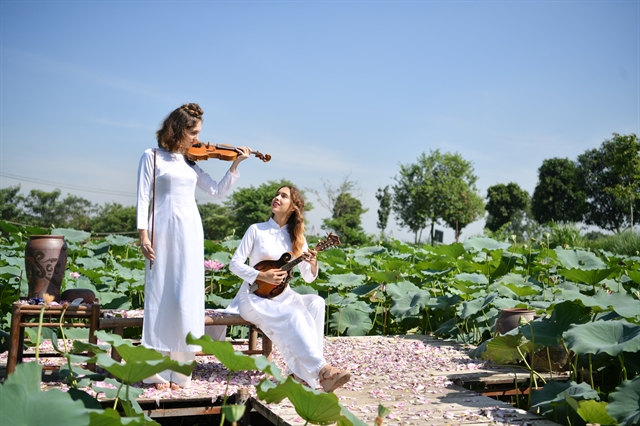 The two sisters record an MV in Hà Nội in June 2020. Courtesy Photo of the band

“It’s very organic and resembles the sounds of nature. That makes it very unique and very different to folk music of other countries,” she told Việt Nam News. “Russian folk music is more for dancing and singing along. Vietnamese folk music is to open your heart and feel love and nature.”

“When we sing, especially in the middle of natural landscape like in Tràng Anh, Tam Cốc or Cúc Phương in Ninh Bình Province, we feel the music has a lot in common with the nature,” she said.

“What was the most amazing thing in Việt Nam and also the reason why we stay here is the way Vietnamese people reacted to our music, to us in interpreting Vietnamese songs,” Sonya said. “In general, Vietnamese people are very friendly and open.”

“Once we sing in Vietnamese, we want to be a part of the culture,” Sonya said.

Sonya said they have been to 19 countries since they were five years old when they started learning to play instruments.

She said they tried to learn to sing in Vietnamese when they first performed at Hoàn Kiếm Lake by using YouTube to sing Vietnamese songs as karaoke.

“It was hard at first when I look at Vietnamese words and think of them as the ones in English,” Sonya said. “Like Em Gái Mưa (Little Girl in Rain), I saw “mưa” and I read as “mua” in English, which is a different word in Vietnamese. I don’t see any difference in spelling.”

“But when I learn vowels in Vietnamese, I found out the difference,” she said. “My friend has helped me so much and I found it gradually much easier. Now it’s good.”

“I really like Sơn Tùng MTP,” she confessed. “He has a very pleasant voice and catchy songs.”

Sonya said she hopes to release some covers of his songs.

“Min and Erik are also very cool singers with very pleasant voices,” she said. “Also Tuấn Hưng and Mỹ Tâm are great singers and I really love their energy when they perform. All of those singers, and many others, of course, are very inspiring and I hope to perform with them one day.”

Sonya said here everything is different, from people to weather

“Lifestyle is different,” she said. “It’s like two different worlds. That’s why we like to travel, to experience different ways of living and different cultures, different traditions. Việt Nam is very different to other countries, very unique. It cannot be compared because it’s too much impressive.”

“You will have mountains, fields of flowers, sea, and beach. Each place you go seem to be in a different country,” Sonya added.

But one thing in common is that wherever you go, there are friendly and open Vietnamese people, she said.

The two sisters are currently working on a project to record a song and then go to the northern part of Việt Nam to perform this song to Vietnamese poor children, give them food and gifts and play games with them. 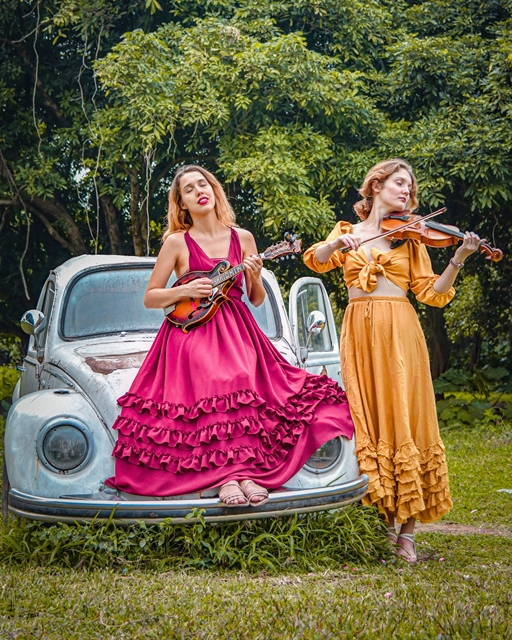 The two sisters now engage in a charity project for children in Việt Nam. Photo Courtesy of the band

They will film it all and then release music video for the song with footage of the children and their lifestyle. At the end of the video will be a donation button so people can pledge money to help those children.

The two sisters want to work with a trustworthy charity with whom they can do the project.

“Those children are all beautiful, clever and talented,” Sonya said. “They deserve the opportunity to have and make more in their lives. VNS

Previous: Sacombank profit reaches $61.5 million in the first half
Next: First housing project in Khánh Hòa allowed to sell apartments to foreigners