Posted by: vivian on May 17, 2019 in Arts & Entertainment Comments Off on British billionaire proposes marina construction in Đà Nẵng 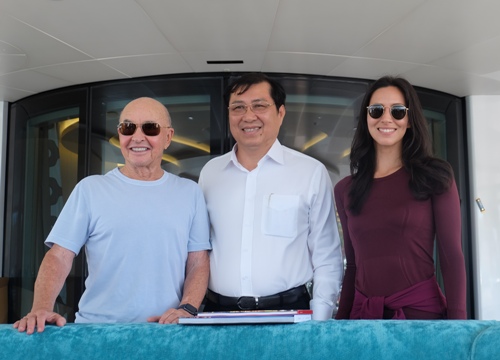 Joseph C. Lewis, (left), a British businessman and investor, hosts the chairman of Đà Nẵng People’s Committee on the Aviva Yacht on May 13. He proposed  developing an international Marina on the Hàn River after his yacht Aviva docked at Tiên Sa Port for a short visit to Đà Nẵng and Hội An on May 13-14. — Photo courtesy of Da Nẵng city portal

ĐÀ NẴNG — Joseph C. Lewis, a British businessman and investor, proposed developing an international marina on the Hàn River after docking his yacht Aviva at Tiên Sa Port for a short visit to Đà Nẵng and Hội An on May 13-14.

The British billionaire, who owns the English Premiership Tottenham Hotspur, also had a meeting with Chairman of the Đà Nẵng People’s Committee Huỳnh Đức Thơ on board Aviva during the stop.

In a letter sent to the city’s People’s Committee on May 15, he wrote: ”I would like to thank you and your team for paying a visit to Aviva. It was such a pleasure to host and to get to know you on my yacht here in Đà Nẵng.”

“It has been such an amazing experience since we arrived with the incredible hospitality from our Vietnamese friends and certainly from your beautiful city. As we discussed, I would like to express my interest in working together towards a marina construction idea somewhere on the Hàn River. This might be the first marina in Việt Nam with international standards to attract and facilitate more yacht and boat arrivals in the future to Đà Nẵng.”

Lewis’ total wealth is estimated at US$5 billion, and he is listed as the 388th richest person on Forbes’ 2018 list of billionaires and the 12th wealthiest person in the UK as of March 2018.

Lewis also paid a tour to the spectacular Cầu Vàng (Golden Bridge), which was included on the top 100 World’s Greatest Places for 2018 by the US magazine Time.

The city’s Tiên Sa port in 2018 hosted 74 cruise ships carrying 87,000 international tourists, representing 29.9 per cent of the country’s total cruise tourists, according to a city report.

Tiên Sa Port is a favourite dock site for cruises, international standard shopping centres and entertainment, duty-free shops and unique souvenirs in close links to other ports in Asia such as Hong Kong, Shanghai, Japan, Taipei, Singapore and Malaysia, with a range of 550 to 2,300 nautical miles.

In 2013, the resort was a rendezvous of the close-door international meeting – Creative Connections – of international businesspeople, including former English Premier Tony Blair and former US Secretary of State Colin Powell.

The city was the home port for the Việt Nam team taking part in the world-famous Clipper Round the World Yacht Race in 2015.

Previous: VAMC to reclaim US$2.13 billion in bad debts
Next: Waterfalls in Việt Nam on list of world’s most beautiful