A cool afternoon in early spring. Life flows in the West Lake area of Hà Nội, where people run or ride bicycles past the shores of the lake. Gusts of wind bring moisture and the faint odour of fish.

In his workshop deep in a lane near the lake, Simon Redington loses himself in an oil on canvas painting.

The sound of music overwhelms the workshop, which is stuffed with paintings, sculptures and the smell of paint. The British artist is putting the final touches on the piece. From time to time, he looks at details he sketched in a small draft hung next to the painting.

It’s a typical afternoon for Redington, who has lived in Việt Nam for the past 20 years.

Redingint admitted he was something of an old-fashioned artist and changed to become a painter.

“I have done a lot of printing over the year. But now I’m going back to do more painting but I enjoy making prints. I paint on oil on canvas and the printing technique is old fashion, pre-digital, etching,” he said.

Redington said he had done a set of prints called Hanoi Thunder, featuring mythical images of his imagination.

“They are based on drawings and photographs that I have taken of Hà Nội, but they’re not specific to one place, but they are specific to one time when I first arrived here, and the sort of the magic Hà Nội, which I tried to represent in images,” he said while showing off his prints.

“But as I try to describe it, they are not objective images, typical graphic images of houses and places. They are images of imagination, and images of emotional feelings, of pre-progress, an old town, one of the last old towns.”

He said it took him a very long time before he was able to make these images. 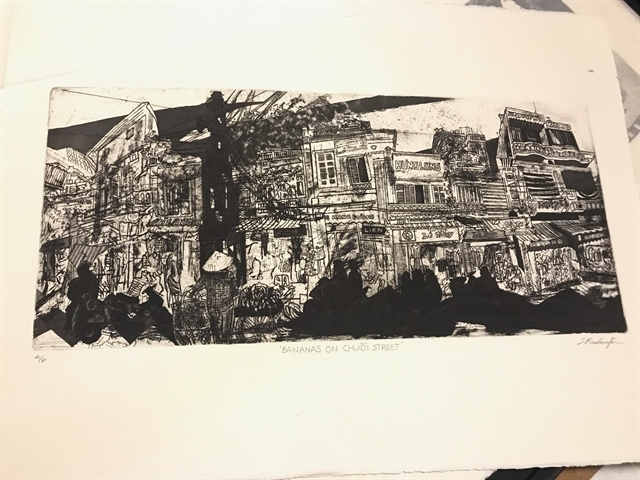 “Maybe 15 years living here to feel like I knew the place enough to be able to make these images,” he admitted.

“I thought to myself: ‘oh, that’s Hà Nội, so lovely and gentle in the eyes of a foreigner,'” he said. “The audience will not only recognise typical features of streets and residents in Hà Nội but also feel an ancient romantic city.”

The main reason for Redington to live in Hà Nội is that his wife is Vietnamese, and “it’s a good place to live”.

“In general, as you see, the vast majority of people are a lot happier in Việt Nam than they are in other countries,” he said.

“For me, it’s a very conducive place to live and to do what I want to, to make paintings,” he added.

Despite his love for the country, Redington does have some concerns about the changes occurring in Việt Nam.

“I think it’s danger making a place just like other countries,” he said.

“The first time I knew him was when he made prints,” Hà said. “It can be said that his zinc etching technique is very good. He’s a very open-minded man, he said he will show me in great detail if I want to learn the skill.” 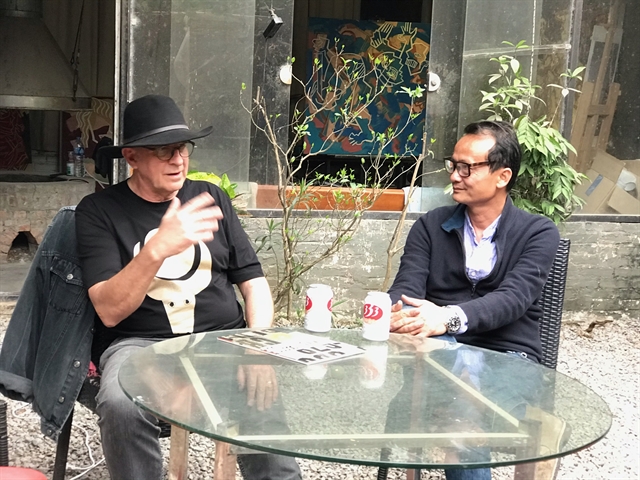 Hà said his way of working is very professional. He searches the material very carefully and then develops it, without mere improvisation.

“Making edging prints is a bit of a dry job, the image and features are relatively clear,” Hà noted. “It’s been a very long process, and up until recently when I watched Simon’s Noise exhibition, it was a very good move. After all, his works are still a bit graphic, but there has been a new movement. His paintings are more gentle, with a new perspective.”

“I am happy to be here, I carry on my work, the Government has been doing a good job, containing the pandemic, people are responsive here,” he said. “It’s interesting that a socialist country seems to do a lot better than capitalist countries.”

He would like to take some of his Vietnamese artist friends to work and exhibit in Europe as a way of showing gratitude to the people who have helped him make his home in the East. —VNS