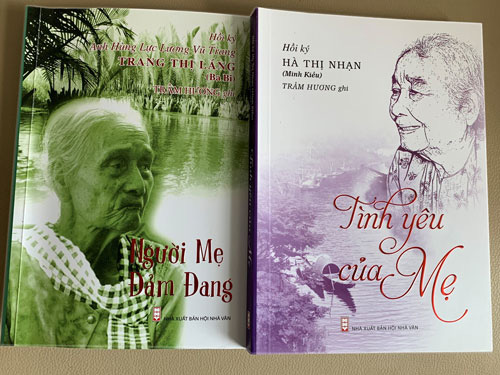 The two books highlight Trang Thị Láng and Hà Thị Nhạn of the Mekong River Delta’s Trà Vinh Province. They received the State title of “Vietnamese Heroic Mother” for their contributions and sacrifices to the country’s independence and reunification.

The publication celebrates the 46th anniversary of the Liberation of the South and National Reunification on April 30.

Both works include chapters featuring stories told by the mothers’ family members and villagers about the mothers’ contributions to the anti-French and anti-American wars.

Their working and thinking, and the challenges they faced to overcome great difficulties, are all highlighted.

Themes about love and peace are also included. The author’s simple and lively language expresses her feelings about the mothers who devoted their life for the country’s independence and freedom.

“Through author Hương’s language in two books, Người Mẹ Đảm Đang and Tình Yêu Của Mẹ, readers, particularly youth, can learn valuable lessons about the country’s heroic history and the great contributions that Vietnamese women have made to the country and people,” said reader Nguyễn Văn Sáng from Trà Vinh.

“Each word from her books is in praise of patriotism and bravery. For young people who have not experienced the country’s wars of resistance from 1945 to 1975, Hương’s books about heroic mothers Láng and Nhạn of Trà Vinh leave a very strong impression,” he said.

According to author Hương, Trà Vinh has 3,346 women who have been granted the title “Vietnamese Heroic Mother” from the Government.

“My books aim to honour the spirit and brave character of Vietnamese Heroic Mothers and speak about how their moral example serves as a model of the spirit that has been maintained and developed throughout the country’s wars of resistance and national construction.”

The country has 139,000 Heroic Mothers and only 5,000 of them are still alive. Many heroic mothers lost their husbands and children on the battlefield for national revolutionary cause. The mothers and their families receive monthly support and special policies from the Government. VNS