Posted by: vivian on August 29, 2020 in Arts & Entertainment Comments Off on Book collection honours children's author

HÀ NỘI — Kim Đồng Publishing House has released a book collection with novels, poetry, short stories and literary studies to mark the 100th anniversary of Võ Quảng (1920-2007) who was a children’s writer.

The collection comprises five books including selected works from the author’s career, including novel Quê Nội (Father’s Village) which was translated into French by writer Alice Kahn.

The highlight of the collection is the book Võ Quảng – Một Đời Thơ Văn (Võ Quảng – Life of Verse and Prose), compiled by the author’s son, Châu Tấn. The book includes some short stories that haven’t been released before, some writings of Quảng on children’s literature and comments of critics, researchers and other writers about Quảng.

“Readers in the Europe may be amazed with the diverse culture of Vietnamese people, the way people enjoy stage arts, how the wartime and poverty inspired folk songs,” said translator Kahn.

“For me, I just want to help French readers understand more about Việt Nam through the stories of Cục and Cù Lao, two characters in Quê Nội (Le village paternel). I think it’s a Tom Sawyer version in Vietnamese.”

Quảng was born in 1920 in the central province of Quảng Nam. He participated in the revolution since he was a student. He has been arrested and tortured many times.

He became the first editor-in-chief of Kim Đồng Publishing House in 1957 and director of the Việt Nam Animation Studio in 1964. He released the first book for children at the age of 38. Since then, he spent time creating stories, poems and cartoons for children.

His poems and short stories have been introduced in pre-school and primary education. The verse and prose of Quảng are familiar to Vietnamese children in different periods.

Apart from writing, Quảng is the first Vietnamese author who translated Don Quixote and Robin Hood of Sherwood Forest to Vietnamese. — VNS 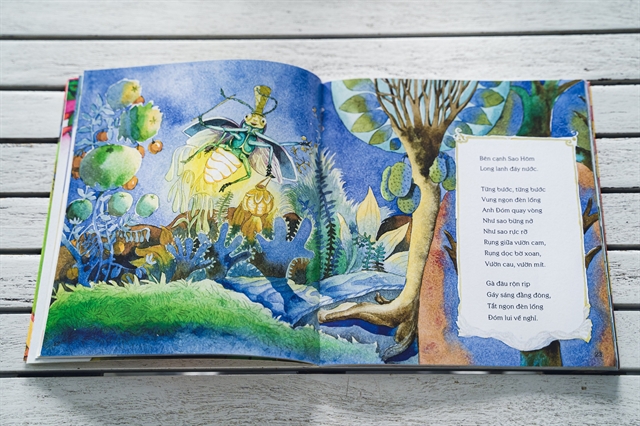