Posted by: vivian on October 15, 2019 in Arts & Entertainment Comments Off on Ballet Giselle returns to Opera House 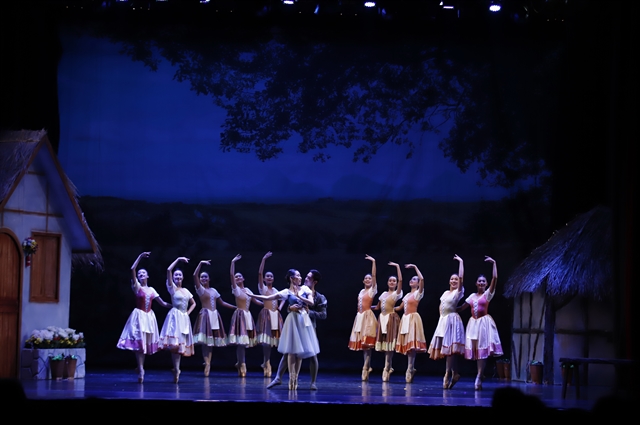 HCM CITY – The classical ballet Giselle, which is considered one of the great Romantic ballets, will return to the HCM City Opera House on October 19 and 20.

The two-act ballet is directed and staged by French dancer and choreographer Chloe Glemot and Japanese dancer Yuki Hiroshige.

The production was welcomed by city audiences when it was first staged at the Opera House in September.

The ballet tells the story of Giselle, a young peasant girl who dies of a broken heart after discovering that her lover, Albrecht, has promised to marry someone else.

The Wilis, a group of ghostly spirits of dead girls who die from broken hearts, target Albrecht. They have the ability to control men and let them dance until they die. But Giselle defends Albrecht with the power of her great love.

Young dancer Đỗ Hoàng Khang Ninh and Meritorious Artist Hồ Phi Điệp will play the leading roles of Giselle and Albrecht, while Hiroshige will play Myrtha, Queen of the Wilis.

Glemot was trained at the Paris Opera Ballet School between 1996 and 2003. She has been a professional dancer for the American Ballet Theatre in New York, Les Grands Ballets Canadiens in Montreal, and English National Ballet in London.

In 2006, she completed her teacher training at the Centre National de la Danse in Paris. She has taught ballet for children and adults at conservatories and schools in Paris.

Hiroshige began practicing ballet at the age of 11, and was trained at Noriko Kobayashi Ballet Academy. She won the Idemitsu Scholarship at the Asian Pacific Ballet Competition and joined the Australian Ballet School in 1993.

In 1996, she began her career as a solo dancer at the New National Theatre of Tokyo for 10 years. She later performed as principal dancer at the Noriko Kobayashi Ballet Theatre from 2005 to 2016.

Giselle was written by French dramatist and novelist Theophile Gautier and playwright Jules-Henri Vernoy de Saint-Georges to music by composer Adolphe Adam. The ballet was originally choreographed by Jean Coralli and Jules Perrot, and was first performed by the Paris Opera Ballet in 1841.

The modern production was later choreographed by renowned French choreographer Marius Petipa for the Imperial Russian Ballet in 1884. The ballet is popular in the UK, Russia and the US.

The performance will begin at 8pm. The Opera House is at 7 Lam Sơn Square in District 1. Tickets are available at the venue and at www.tickebox.vn. — VNS