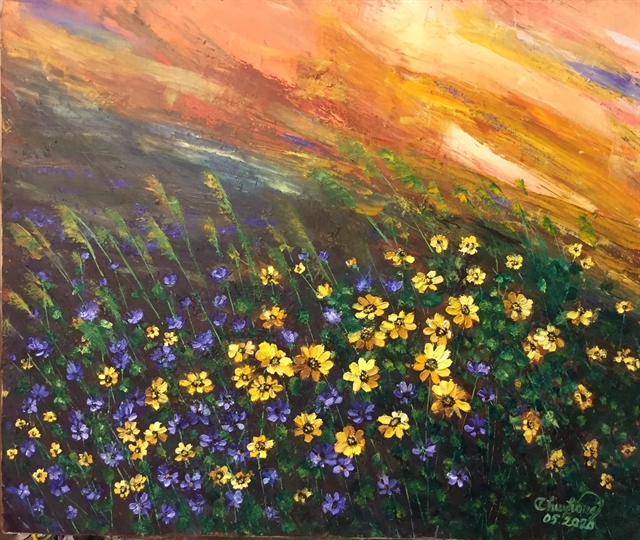 HCM CITY — The Mekong Art Club, one of the most popular arts groups in HCM City, for years has organised hundreds of exchange programmes as a way to connect artists from different regions in the country.

The club is holding the exhibition Tác Phẩm Mỹ Thuật (Arts Works) featuring artists from the city and the Thừa Thiên-Huế Province at the city Fine Arts Association.

It displays nearly 100 works, including wooden and metal sculptures, terracotta, and oil on canvas, lacquer, and watercolour paintings.

Themes of the works are people, culture, and lands of the south-western region. Still-life paintings are also featured.

Trần Vĩnh Thịnh, a painter from Huế City, said: “We are honoured to join the exhibition organised by the Mekong Arts Club. It’s a chance for us to learn about arts from our colleagues in HCM City.

“The club is doing the best job to connect artists across Việt Nam, regardless of their age or style,” said Thịnh.

Điển, 77, moved from his hometown in Bến Tre Province in the Cửu Long (Mekong) Delta, to HCM City in 1986 to pursue his arts career.

Điển said: “I expect the club to be a connection between artists in HCM City and the Mekong Delta region.”

The Mekong Art Club has received huge support from the HCM City Fine Arts Association, which helped Điển launch the club’s debut exhibition at the Lê Thị Riêng Cultural Park in District 10 in the same year.

He invited artists from the Mekong Delta province of Vĩnh Long to join the first showcase.

Since then, the club has organised joint exhibitions for artists not only from the city and Mekong Delta region but also from all over the country.

Its exhibitions have featured artists from the Tây Nguyên (Central Highlands) province of Lâm Đồng, and Đà Nẵng City, Hội An City and Phú Yên Province in central region.

Điển said: “The club is also a playground for people who have passion for the arts. Its members are professional artists, self-taught artists, and even new graduates who come to the club to learn and improve their arts skills.”

Over the past 30 years, many famous names have taken part in the club, such as Lê Kiệt, Lữ Thế, Nguyễn Chương, Văn Y and Nguyễn Thị Thúy Hồng.

According to veteran painter Nguyễn Văn Mười, chairman of the city Fine Arts Association, the Mekong Art Club has fulfilled its duty of connecting arts at all ages and levels from different regions.

“Its annual exhibition at the association has created opportunities for them to meet and share their passion in arts,” Mười added.

The Tác Phẩm Mỹ Thuật (Arts Works) exhibition will remain open until Sunday at 218A Pasteur Street in District 3. — VNS